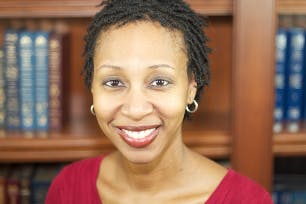 As her father migrated from one university to another to teach, to head programs or to run academic departments, those campuses became a young girl’s home and her playground. They too were places of beauty, remembers Dr. Adia Harvey Wingfield, who learned to move with ease among scholars and students. During most of her youth, living on the grounds or near university gates felt privileged and special.

Often summers were “like being at a country club” with swimming pools and tennis courts, says Wingfield of those early years, most spent at North Carolina State University. But as she traveled among the buildings dotting the landscape, Wingfield would also peer inside those halls of learning. A daughter’s eyes were on her father, scholar and educator William B. Harvey, Ed.D., absorbing all that he did in his world of academia. She watched as he engaged and mentored students in ways that extended beyond the walls of the classroom and how he made the pursuit of equity in higher education the subject of his scholarship, as well as the motivation for his life’s work.

“What I saw was the immense enjoyment that he got out of his work and his ability to make intellectual contributions through research while also using them to also make a difference in the academy and also in society,” says Wingfield. “I knew then that I also wanted to do something to promote change and in an environment that welcomed that work.”

As a sociologist, educator and author, Wingfield is doing just that at Georgia State University and in the world. In 2012, she received the American Sociological Association’s Distinguished Early Career Award. Already with a long list of publications to her credit and making great strides in her field, Harvey says his daughter, the professor, “is probably 15 years ahead of where I was at this same point in my academic career.”

For Wingfield, sociology was a marriage of her belief in social change with scholarship. This product of a K-12 educator mother and a university administrator father jokes that she was destined to take her place “in the family business.” Higher education was a fixture in the memory of her youth. And when it came time to chart her career, choosing a life in academia was as easy as breathing, and sociology was her way forward. The university, she says, represented “a place where I could find answers and pursue questions” about issues of race and racial equality. Her sophomore year as a sociology minor at the historically Black Spelman College was a turning point toward that path. The classic sociology text Race, Class, and Gender, she says, “completely changed my life. It really pushed me to think more specifically about intersectionality, while trying to understand not only race, but the way that race is shaped by gender and the way that it is informed by class.” Wingfield now calls the editors of that college textbook, Margaret L. Andersen and Patricia Hill Collins, her colleagues.

Propelled first by a personal quest to understand how race, class and gender played out in her own life, that soon melded with Wingfield’s professional exploration of how those things operated in the lives of other people. “That’s been the trajectory I’ve followed as an academic, thinking about what these intersecting factors mean in work settings, what they mean occupationally, and what they mean for upward mobility for Black Americans.”

So far, she says, “I’ve focused mainly on how intersections of race, gender and class construct working-class Black women’s experiences as entrepreneurs, but I am interested in examining how this intersectionality shapes occupational opportunities and outcomes for professional and nonprofessional Black men as well.”

Wingfield’s latest book, No More Invisible Man: Race and Gender in Men’s Work, published in November, uses interview study to explore the plight of Black middle-class and professional men, with a focus on the challenges, roadblocks and opportunities they encounter in White-male-dominated occupations. And after chronicling these men’s experiences as “a tokenized minority” in the workplace, Wingfield concludes that for those Black men, “issues of power and inequality exist — especially as it relates to promotion, mobility and developing occupational networks.”