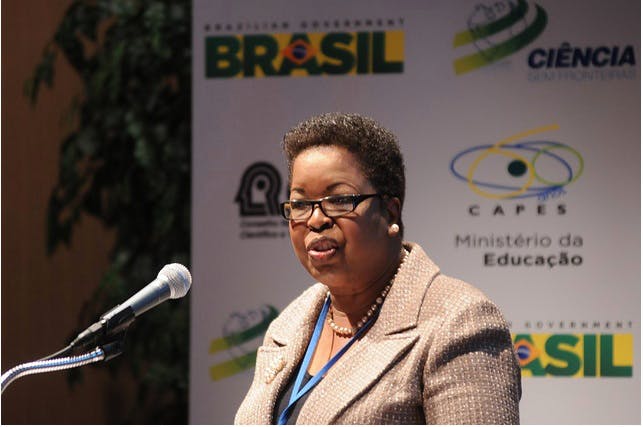 Joan Robinson is provost of Morgan State University and the chair of the HBCU-Brazilian Alliance.
In order to support the partnership between the United States and Brazil, referred to as the Joint Action Plan to Eliminate Racial and Ethnic Discrimination (JAPER), the Brazilian government has agreed to send approximately 1,000 students to several of the nation’s historically Black colleges and universities. As a result, selected HBCUs are preparing efforts to accommodate an average of 30 to 50 students to be admitted into each selected school for the 2013 fall semester.

Brazil, a country that shares a similar historical past to the United States as a hub for transported African slaves, relies heavily on affirmative action within the education system. Facing many of the same social and economic disparities that minorities in the United States endure, the Brazilian government established the JAPER agreement in 2008 to initiate an interagency that would share resources between commercial, economic and educational efforts. Along with the JAPER agreement was the formation of the HBCU-Brazilian alliance, which recognized the social and economic challenges for Afro-Brazilian students.

HBCU-Brazilian Alliance Chair Joan Robinson attributed the barriers of Afro-Brazilian students to the aftermath of Brazil’s slavery, which prevented many of their people of African descent from attaining higher education. With the history of HBCUs as a marking point that eliminated the educational gap for African Americans, the HBCU-Brazilian Alliance attempted to assist Afro-Brazilians in recovering from paralleled injustices.

“[Brazilians] are looking to see what we have done. We [African-Americans] have done a lot after the Civil War. So, we want to make sure that many of the Afro-Brazilians, while also the descendants of slaves, will get an opportunity to go to college,” Robinson explained.

In honoring the alliance during the annual “Brazil-U.S. Partnership for the 21st Century” conference last April, Brazilian President Dilma Rousseff discussed President Barack Obama’s goal of sending 100,000 Brazilian students to schools around the world. Particularly interested in strengthening STEM education for Brazilian students, Rousseff agreed to send 50,000 to American institutions and 1,000 students to HBCUs. Signed with a memorandum of understanding, this new agreement would promote further discussion around collaborative projects, interdisciplinary and transdisciplinary research.

Since Brazil hosts the largest number of people of African descent in the entire Western Hemisphere, it seemed most logical to send a great portion of Afro-Brazilian students to experience HBCUs, where the presence of African descendants tops all other American institutions, according to Meldon Hollis, associate director of the White House Initiative on HBCUs.

“It is a win-win situation,” said Hollis.

Hollis further explained, “[Brazilians] are interested in being involved with and learning from the experience that African-Americans have had in this country in terms of negotiating issues with inequality on an educational and national level. Thus, there’s got to be a two-way road between Brazil and the African-American community in the country.”

With the help of federal agencies like the Institute for International Education (IIE), the HBCU-Brazilian Alliance has already approved 34 schools to participate in the Brazilian student exchange. Of those 34 schools, the most prominent institutions that accepted the students were Howard University, Morgan State University, North Carolina A&T University, Jackson State University, Southern State University and Dillard University. While many other HBCUs were included in the exchange, the aforementioned schools were among the first wave to submit proper documentation in order to be included. Not only were the selected HBCUs the first to respond to the initiative, but they also were schools that, according to the Brazilian government, exhibited strong STEM programs and other academic programs that accommodated the needs of international students.

While the goal still sits at 1,000 Brazilian students to be sent to HBCUs, the reality is likely to change as many educational barriers have surfaced, deterring the initial goal. In agreeing to send Brazilian students, the Brazilian government agency CAPES, which supports and plans the initiative, created stipulations surrounding the eligibility of such participating HBCUs. The main prerequisite was that HBCUs must have a strong English as a Second Language (ESL) program that could accommodate the large percentage of Afro-Brazilian students that were soon to be entering the campuses.

“In taking a particular interest in Afro-Brazilian students, it presents the same kinds of problems you’d run into if people from outside of the country requested African American students, which is that many of them come from an urban public school systems, and therefore, it is a lot less likely that they will bring substantial English language training,” Hollis said.

According to Hollis, the language barrier for many of the Afro-Brazilian students will begin to hinder the number of students able to come to American institutions. As a result, the HBCU-Brazilian Alliance has allotted the first wave of students to be used as a test run for the initiative. Students who will need extensive training in the English language will be instructed to arrive at their designated HBCU in June to begin 90 days of preparation before the fall semester begins. After identifying the number of students requiring additional education assistance, the Brazilian government will reconfigure the amount of funding allocated to the program to further support a larger wave of students for the upcoming years.

CAPES is still accepting applications from many of Brazil’s most competitive students. Once applications are submitted, CAPES sends all of the students’ documentations to the Institute for International Education, which evaluates the transcripts in order to recommend a suitable academic curriculum for Brazilian students during their time at a designated HBCU campus. Since Brazil’s school system is marked differently in its time frame where Brazilian students attend school for a longer period than American students, the evaluation differs per student.

As students arrive to HBCUs, the Brazilian government will send monetary assistance for each student, covering all expenses with tuition, room and board and any supplemental living expenses. After all paperwork is submitted and reviewed, the final decision and placements will be announced in March, allowing students to prepare for the upcoming fall semester.