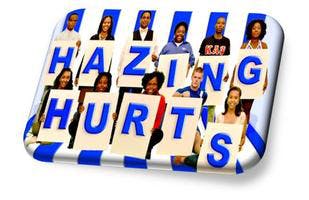 “Hazing Hurts” summit addressed issues around a culture of hazing.

Hazing is a ritual as old as time. It happens in virtually every area of social interaction among humans — between coworkers, teammates, even lawmakers. But in recent years, the darker, sometimes deadly side of hazing has become more evident. The very phrase ignites anger and revives unpleasant memories in the minds of millions.

Hazing is also a reality in the higher education world, especially in athletics, as well as in fraternity and sorority life. Though not exclusive to it, the community of historically Black colleges and universities (HBCUs) has seen its share of these scandals in recent years. The most notorious example is the extreme hazing that ultimately led to the death of Florida A&M band member Robert Champion in November 2011.

The 90-minute summit consisted of panels infused with both students and administrators. Serving as moderator for the FSU forum was Dr. Jason DeSousa, assistant vice chancellor for student retention at Fayetteville State. DeSousa is also co-author of a report titled Hazing and Pledging in African American Fraternities and Sororities.

Panelists and audience members engaged in a lively and spirited dialog. The conversation ranged from consequences of hazing to alternatives. The biggest debate was over exactly what constituted hazing.

Fayetteville State faculty member Cherelle Harris stated she was hazed by having to pick up an elderly member of her sorority and take her shopping. Many students in the audience seemed taken back by that assertion, including North Carolina Central senior Jaron Allen.

The political science major from Louisburg, N.C. is a member of Omega Psi Phi Inc. and vice president of NCCU’s National Pan-Hellenic Council.

“People might consider that hazing, but I consider that as bridging a gap,” he said. “I know people in my organization who joined in 1940 and have met the founders. To me that is not hazing, that is you learning about the organization you wish to join.”

Despite the fact that it dominated the conversation, Greek life was not the sole focus of the hazing dialog. Students also addressed issues of hazing in athletics and other extracurricular activities. Coincidentally, North Carolina Central’s drumline made headlines when it was temporarily suspended for hazing last fall.

Allen said that engaging in conversations with students from other campuses definitely opened his eyes to just how much the definition of hazing can vary from one person to another.

“We want to give people a broader explanation of what hazing is,” he said. “Some people consider hazing just running up to people and slapping them.”

At one point during the discussion, the students were given a hypothetical situation, in which a fraternity’s new recruits were asked to build a mountain of bricks overnight for a celebration. After a brief discussion with their peers, most student representatives stated they would not view themselves as being hazed if they were the students in question.

Robin Featherstone is an assistant director of student union/Greek life and special programs at North Carolina Central. She is also a longtime member of Zeta Phi Beta Sorority Inc. Having been involved with Greek life for over 20 years, first as a student and now as an administrator, she said she has definitely noticed a difference in terms of hazing awareness.

Featherstone said overall, she was pleased with the attendance, estimating that out of all the students that have applied for Greek for this semester, approximately 80 percent were in attendance.

She also stressed the importance of hazing awareness for everyone involved, or who may become involved in Greek life.

“I want us all to understand — the ones who have gone through the process already, the ones thinking about it, the ones who are going through it now — that hazing does hurt,” she said. “It’s not necessary, it’s a serious thing, people are losing their lives behind it, and our university has a zero tolerance for it.”

Sousa said that while he was pleased with the turnout and the results of the summit, he feels progress can only be made through continued action and process evaluation.

“I was pleased with the turnout,” he said. “These conversations need to be ongoing.”