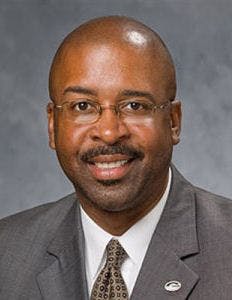 JACKSON, Miss. — More than 50 years ago, the University of Southern Mississippi rejected a chance to admit a Black man and end segregation in the state’s higher education system. Today, the school is likely to become the first of Mississippi’s historically White public universities to be led by a Black man.

College Board officials said Friday that they want Rodney Bennett, the University of Georgia’s vice president of student affairs, to become the next president of the 16,000-student USM.

Bennett was chosen from among three finalists by the board that oversees all eight public universities. Assuming campus interviews go well, Bennett will likely be named to the post Thursday.

“I think the trajectory that the university is on lends itself to a possibility of changing the trajectory of higher education in Mississippi and the Southeast,” Bennett, who was not present for the announcement, said in a phone interview with reporters.

The focus Friday was on Bennett’s ability to mend USM’s strained finances, raise private money and recruit new students, not his skin color.

“We selected Dr. Bennett for his leadership abilities,” Blakeslee said. “He’s a man of integrity. We understand the significance, but it wasn’t a factor in the decision,” said Ed Blakeslee of Gulfport, president of the College Board.

But higher education historian David Sansing said it was important not to miss Bennett’s place in history.

“It is one more significant example of how Mississippi has changed,” said the retired University of Mississippi professor.

Sansing noted that Clyde Kennard, a Black Korean War veteran, unsuccessfully tried to enroll at what was then called Mississippi Southern College three times in the 1950s. To end his threat to White society, officials ultimately trumped up charges that he stole $15 of chicken feed and sentenced him to seven years in Parchman penitentiary.

Kennard fell ill with cancer and was released from prison, dying in 1963, months after James Meredith became the first Black person to enroll at the University of Mississippi, breaking the state’s color barrier in higher education.

Despite the resonance with Mississippi’s racial history, those who chose Bennett are looking ahead.

Butler, a senior from Vicksburg, Miss., is herself Black. She represents the diverse present at a school where Black enrollment has risen steadily over the last decade, and now make up nearly 30 percent of students.

“It’s an awesome feeling, especially me having been a part of this process, not knowing that was even an option,” Butler said of choosing a Black president.

“At the heart of a university are its students,” Bounds said. “We exist to meet the needs of our students and Rodney gets that.”

Hurricane Katrina battered the school’s Gulf Park campus in Long Beach. It has struggled to find the money to offset falling state support, and most recently has seen turmoil in its athletic department following a budget shortfall and a winless football season.

“We needed stability, because that’s something we haven’t had in the last 15 years,” said Lou Ann Poynter, a USM graduate who led the search.

USM has been a school with something of an inferiority complex, trying to define an identity against the better-known University of Mississippi and Mississippi State University. “We’ve always has a problem of not having a real sense of who we are,” said Poynter, who added she believed Bennett could help USM overcome that problem.

Bennett will hold meetings Wednesday at USM’s Gulf Park campus. Thursday, he will meet with staff, faculty, students and community members in Hattiesburg. The College Board has scheduled a vote on Bennett’s appointment Thursday afternoon.

“The fact of the matter is he was the very most qualified person for the job,” Bounds said. “He may have some obstacles he needs to overcome, but he will overcome those by just stepping in the room with people.”