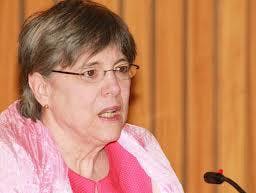 Maureen Budetti, NAICU director of student aid policy, says that schools are being asked to provide prospective students and their families with information that might be overwhelming.

WASHINGTON — As the federal government seeks to expand its reach within the realm of higher education, administrators should expect their institutions to face more scrutiny, more accountability and more unfunded reporting requirements.

That was a the advice delivered during a half-day “academy” that kicked off the annual meeting of the National Association of Independent Colleges and Universities, or NAICU, this week on Capitol Hill.

Some of the more spirited discussions concerned federal efforts to require colleges and universities to collect and disseminate data on how much their graduates earn upon graduation.

“If you want to look into the crystal ball to the new regulations of higher education, you need to be prepared to collect more systematically and report more information related to the employment of graduates,” said Susan Hattan, NAICU senior consultant.

Hattan made her remarks during a session titled “Assessing Institutional Quality through Graduates’ Earnings.”

Hattan said efforts to tie wage data for graduates back to institutions and programs emanates from larger conversation about whether a college degree is worth it in light of the nation’s ongoing employment woes, the rising cost of tuition and growing amount of student debt. She noted how two bills known as the “Student Right to Know Before You Go” act — one sponsored by U.S. Sens. Marco Rubio (R-Fla.) and Ron Wyden (D-Ore.) and another one by U.S. Reps. Duncan Hunter (R-Calif. ) and Robert Andrews (D-N.J.) — would have required the posting earnings data on graduates by institution, degree and program. She also recalled the Obama Administration’s court-blocked bid to require for-profit colleges to post “gainful employment” data on their graduates.

Tying wage data for graduates to institutions and programs is already being done, said Mark Schneider, vice president of the American Institutes for Research, who spoke of research he has done in half a dozen or so states to link wage records to student transcripts in order to determine how much graduates from a given program within a school earn upon graduation.

While the records enable him to determine short-term earnings for graduates, he said the data does not enable him to figure out how much they earn later in life.

The longer-term data is important because it will confirm or refute the notion held by proponents of liberal arts education that liberal arts degree holders may not earn much after graduation but fare much better in the long run.

But in the short-term, Schneider’s research in Virginia has found that graduates of occupational or technical associate degree programs out-earned bachelor’s degree graduates by almost $2,500 statewide.

Graduates of not-for-profit colleges — where he said graduates mostly earned liberal arts degrees — fared the worst in Virginia in terms of earnings upon graduation, according to Schneider’s research.

“This is a serious issue in terms of measuring what students earn,” Schneider said during a forum titled “The Changing Role of the Federal Government in Higher Education.”

“We need you to say [to policymakers]: ‘One-year data is not sufficient,’” Schneider said. “We have to know what happens to students 10 or 15 years out.”

Others noted that Schneider’s data on Virginia graduates only captures students who continue to work in Virginia — about a third or so of the graduates — whereas many graduates from Virginia colleges and universities may go on to work for the federal government in D.C., on Wall Street in New York or on the West Coast.

Schneider conceded that there is a need to capture data of graduates nationally.

“This is a serious data issue that the nation has to address,” Scheider said.

In a session titled “Shopping for College: What the Feds Think Students Should Know,” Maureen Budetti, NAICU director of student aid policy, said that colleges and universities are being asked to provide prospective students and their families with information that may overwhelm or confuse prospective students.

“We’re not against disclosures. We believe that [with] consumer information, transparency is a good thing,” Budetti said. “The problem we’re having is that it’s just too much information,” she said, raising concerns that prospective students and their families may ignore the information altogether if they don’t deem it useful.

She also said it was burdensome for institutions to produce much of the data.

Among the things that Budetti took aim at was the new Shopping Sheet created by the U.S. Department of Education.

Though no NAICU institutions were among the 500 colleges and universities that have volunteered to use the shopping sheet, Budetti said it “has a lot of problems in it.”

“We tried to tell [the Department of Education] you can’t put everything on the first page or the way that you think is best,” Budetti said. “We need to have some flexibility.”