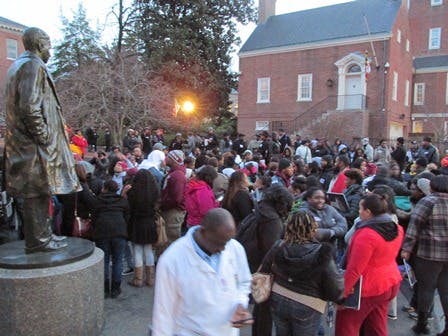 Students from Bowie State, Coppin State and Morgan State Universities and the University of Maryland Eastern Shore gathered in front of the Maryland State Capitol Building.

ANNAPOLIS, Md. — Students from Maryland’s four historically Black colleges and universities (HBCUs) rallied on Monday in order to get the state’s attention for increased funding.

Approximately seven buses loaded with students from Bowie State, Coppin State and Morgan State Universities and the University of Maryland Eastern Shore gathered on the lawn in front of the Maryland State Capitol Building. The crowd of students chanted school-specific cheers, launching the event as they awaited the line-up of speakers.

The rally was a continued effort of the lawsuit, filed in 2006, that claims that the state of Maryland has not discontinued policies and practices that have marginalized HBCUs in relation to the state’s White public institutions. Closing arguments were heard last October.

With support from faculty members of the four Maryland HBCUs, Maryland delegates, representatives from Black fraternities and sororities, along with organizations such as HBCUnified, the Legislative Black Caucus of Maryland and the NAACP, the rally gathered hundreds of individuals.

Roger Barnes, rally participant and president of the Phi Beta Sigma fraternity, Zeta Alpha Sigma Chapter, said, “What we’re hoping to accomplish is great support from our chapter and the community so that there is a change in the funding to support student services, which is the academic support, at those four Maryland HBCUs.”

Although Barnes declared the rally’s main purpose was for increased financial support, he also emphasized that the rally was an initiative that sought more than a response from the previous court.

Barnes explained, “It’s not just the court case that we are concerned about. We need for academic services, student counseling, student scholarships, amongst other things to be improved and approved by the help of state legislature.”

The judge presiding over the case has not indicated when a ruling can be expected. To date, Maryland’s HBCUs have collectively asked state administration for $2.1 billion in funding. Financial support would go toward enhancing the infrastructure, increasing “high-demand” education programs and allowing a “critical mass” of talent to attend the historically Black institutions.

Headed and implemented by the Legislative Black Caucus of MD, the rally presented issues that stood beyond unequal funding such as social and political injustice. Delegate Aisha Braveboy, chair of the caucus, called on Gov. Martin O’Malley to assist HBCUs with “economic development and academic enhancement in order to keep HBCUs moving forward.”

Braveboy alluded to a previous notion of social and political injustice introduced during the time of the court case. Six years ago, Morgan State President Dr. Earl Richardson testified against the Maryland Higher Education Commission, which was asked to approve a joint partnership between Towson and the University of Baltimore for a master’s in business administration program. The partnership, at first, was supposed to operate between Morgan State and Towson University, but Morgan State declined, claiming they already had a similar program in existence. Also, it claimed the program’s partnership would violate a Supreme Court case ruling set in an affirmative action case with Mississippi’s higher education system.

Morgan State proposed a cooperative agreement that enabled Towson’s undergraduate students to spend two years at Morgan’s M.B.A. program, followed by an initial three years at Towson. Once, Towson rejected the agreement, noting it as the authority of an independent degree program, Maryland court hearings for HBCU inequitable funding began to surround its content around the decision.

This decision, coupled with other issues cited in the hearing, were prime examples of how Maryland’s Black institutions were receiving inequitable financial support, according to several of the HBCU presidents present at the rally. Issues such as the lagging financial support were reasons behind several of the school’s low graduation rates. With inadequate programs and the heavy reliance on adjunct professors, many schools claimed that the suffering academic programs need state assistance.

Coppin State Interim President Mortimer Neufville said that his school has been a “bridge for Black talent” with programs such as the nursing program, ranking in the top 100 graduate programs in the nation. Neufville reminded the community in his speech that Coppin’s nursing program has served a large majority of Black students, and as a result, remains a viable source that states should begin to recognize.

Tylar Brock, president of the student government association at Bowie State, reiterated this message and noted that his school has graduated many first-generation Black students as part of its mission.

“We have been called upon to fight not only for the resources and support of financial aid, but also to increase our graduation and retention rates. Additionally, we need funding to allow our first-time students who have joined the BSU academy and give them an opportunity to walk across that stage,” said Brock.

The rally, as a successor to the court hearing, is a stride forward toward the lingering battle for increasing HBCU funding from the state of Maryland.