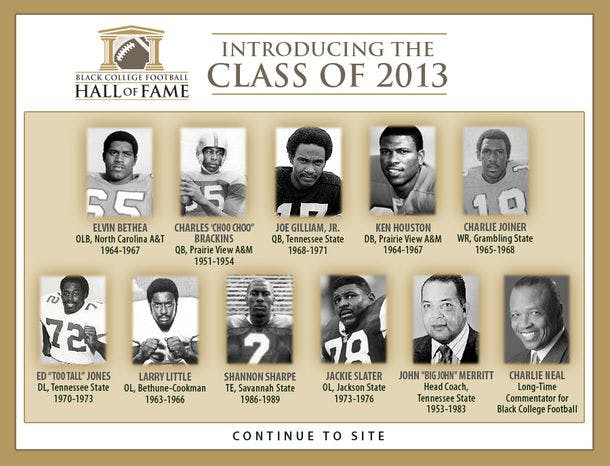 When it comes to football at Historically Black Colleges and Universities, most people are probably more familiar with the marching bands in the stands than the players on the field. Though these programs have struggled to build nationally viable programs in recent years, at one time some of the greatest professional football players of all time called many of them home.

Located in Atlanta, Ga., the Black College Football Hall of Fame was founded in 2009 to honor the contributions of players who participated in HBCU football over the past century. The first class in 2010 included Jackson State’s Walter Payton, Mississippi Valley State’s Jerry Rice and Grambling coach Eddie Robinson. Since then, players inducted include Grambling State’s Doug Williams, Alcorn State’s Steve McNair and the University of Maryland-Eastern Shore’s Art Shell.

The 2013 class is as star-studded as any of them, including six players who have been inducted into the Pro Football Hall of Fame.

While at NC A&T in the mid-1960s, Elvin Bethea was a two-way player for the Aggies. After terrorizing the CIAA for four years, Bethea was drafted by the Houston Oilers to play offensive lineman. He was later switched to defensive end, where he ended up playing in eight Pro Bowls. When Bethea was inducted into the Pro Football Hall of Fame in 2003, he was introduced by his college coach, Hornsby Howell.

“From Day One, when he was a defensive line coach at A&T,” Bethea told the Greensboro News and Record, “he was the guy that instilled in me all the things it takes to be a college athlete and a determined athlete.”

Bethea will be joined in the hall by his teammate, Ken Houston. Like Bethea, Houston played both ways for Prairie View A&M in the mid-‘60s. He showcased his versatility by transitioning from an All-American center and linebacker in college into one of the top defensive backs of the 1970s. The 10-time Pro Bowler was selected to the Hall of Fame in 1986.

Eddie Robinson coached hundreds of professional players, but none of them were as good for as long as Charlie Joiner. The talented wide receiver played an astounding 18 NFL seasons and finished his career as the NFL’s leader in receptions, yards and games. He was inducted into the hall of fame in 1996.

After starring at Savannah State as a wide receiver, Shannon Sharpe was nearly cut by the Denver Broncos as a rookie. Luckily for Sharpe and Denver, they decided to keep him. He finished his career as the all-time leader in receptions, yards and touchdowns as a tight end. He was inducted into the Pro Football Hall of Fame in 2011.

“It’s not where you are, it’s where you end up,” Sharpe told USA Today in 2009. “If you’re good, they find you. I remember my coach Bill Davis told me the same thing. They’ll find you.”

Jackie Slater spent his college career blocking for Walter Payton at Jackson State. As a member of the Los Angeles Rams, Slater helped pave the way for Eric Dickerson’s record breaking 1984 season. After playing in 259 games from 1976 to 1995, he was selected to the hall of fame in 2001.

Despite being a three-time All-SIAC selection in the 1960’s, Bethune-Cookman’s Larry Little went undrafted. He would later sign with the Miami Dolphins and was one of the members of the 1972 team that remains the only team in modern NFL history to finish with a perfect season. Little was selected to the Pro Football Hall of Fame in 1993.

Ed Jones may have been one of the greatest athletes of his time. He came to Tennessee State to play basketball, but the 6’9 Jones, who became better known as “Too Tall,” eventually found his way onto the football field. He was the first player from an HBCU drafted first overall by an NFL team in 1974 and would become one of the major cogs in the Dallas Cowboys’ “Doomsday Defense” of the 1970s and early ‘80s.

Jones is one of three men headed to the hall with Tennessee State ties. He will be joined by two other Tigers, Joe Gilliam and John Merritt. In fact, Jones credits Gilliam’s father, Joe Sr., with being an instrumental part of his success.

“Joe Sr. was the one that turned my career around,” Jones told ESPN. “It’s wonderful to have three people from Tennessee State going into the Hall of Fame.”

Joe Gilliam Jr. grew up around the campus of Tennessee State, and, by the time he left in 1971, he had shattered every record the school ever had. Gilliam would start for portions of the Pittsburgh Steelers’ 1974 and ’75 seasons, earning two Super Bowl rings in the process.

Merritt coached at Jackson State and Tennessee State, winning 235 games and losing just 63 in 31 years of coaching. Merritt was selected to the College Football Hall of Fame, and Tennessee State continues to honor him by hosting the John Merritt Classic every year.

Charlie “Choo Choo” Brakens was a true trailblazer, becoming the first HBCU quarterback to be drafted by an NFL team when he was selected by the Packers in the 16th round of the 1955 draft. Despite his amazing winning percentage as a college QB, Brackins threw two incomplete passes in one game and never saw the field again.

Rounding out this year’s Hall of Fame list is commentator Charlie Neal. Neal has worked in several of the nation’s biggest media markets, providing commentary and insights on HBCU Sports. Neal joined ESPNU in 2005.

The class will be officially inducted Saturday.