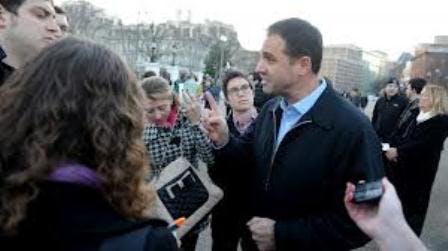 Andy Pelosi, executive director of the Campaign to Keep Guns Off Campus, says he expected a surge in activity by gun lobbyists.

The December national tragedy at Sandy Hook Elementary has not only brought on redoubled efforts by gun lobbyists to prevent change in current law in Washington, D.C., but it’s also fomented a charge at the state level to allow concealed weapons on college campuses.

“There is a lot of activity, which I expected after Newtown,” said Andy Pelosi, executive director of the Campaign to Keep Guns Off Campus, an anti-gun group that was launched just after the 2008 Virginia Tech mass shooting. To start out 2013, Arkansas’ state House of Representatives has been at the center of the debate, passing a law allowing for college faculty to carry concealed weapons on school grounds. “We’ve seen bills in a number of states. They’ve been defeated in South Dakota and Wyoming so far,” said Pelosi. “It’s a pretty big battle that’s going on right now.”

While gun lobbyists and legislators are busy working on laws that will affect universities’ security greatly, those who will be affected by the new bills are largely unaware of the activity, said Julie Gavran, a Ph.D. student at the University of Texas at Dallas who keeps up to date on the issue by coordinating social media for Students for Gun Free Schools. “The problem is that legislators are trying to sneak these things in without public awareness. And that’s basically why we’re here to raise awareness,” she said. “We’re not used to being part of the legislative process, and we trust our elected officials.”

Several college professors spoke out in favor of the Arkansas bill, but Gavran argued that’s not the consensus nationwide. “If you talk to large student bodies, a lot of the presidents at the universities, law enforcement, faculty and staff, no one wants that atmosphere,” she said. Steve Jones of the gun advocacy group Arkansas Carry has pointed out that police often can’t respond quickly enough to a shooting at a school and that having “trained, vetted individuals that will provide immediate defense for them, if an incident occurs,” would offer students assurance. Still, the Southern state’s bill is a bit murky in that it doesn’t define who are faculty and staff — Are adjuncts and student teachers included, asked Garavan. Regulations with regard to sporting arenas and other halls for congregation are also undefined in many of these bills, she noted. “It’s very complicated, and none of it is good from our standpoint.”

With a coalition of students, faculty, UT System Chancellor Francisco Cigarroa and a backlash from the Austin campus, Students for Gun Free Schools helped defeat a bill in the 2011 Texas legislative session to allow for concealed weapons on campus. It’s up again this year, and Cigarroa once again has voiced his concern, said Garavan. “There has not been one university president, board of regents — no one has asked for this legislation in any of the states. I think that said a lot,” she said. “The push for arming college students who are old enough, faculty and staff is just another way of kind of planting a seed in a younger generation to grow a newer gun culture of, ‘It’s OK to have guns.’”

The Campaign to Keep Guns Off Campus helped defeat 14 bills that would allow for guns on campus last year. With 359 schools signing on to a petition against this sort of legislation and a letter signed by a cohort of private colleges in December, the group hopes to do even more. Public institutions are the ones at stake, said Pelosi, because private schools have their own jurisdiction on the issue. In addition to drawing support from college presidents and leaders with a petition, Pelosi’s organization is reaching to faculty senates for support. “We’re trying to do a little bit more outreach to college professors — we’re trying to activate that contingent — because I think that they can be a very important constituent in this battle. We’re really putting more efforts into faculty recruitment right now,” he said.

Students for Gun Free Schools, meanwhile, is focusing on tapping leaders at universities across the country to do things like call state district representatives, take protests to state capitals, set up phone banks and build campaigns on all media platforms. “We’re basically trying to raise awareness and let student leaders on campus take hold of it,” said Gavran.

Although the majority of the nation’s 4,000-plus higher education institutions ban firearms on campus and the Arkansas bill has a provision for universities to opt out of the law, Gavran said high-profile massacres like the one at Newtown only spur gun lobbyists to secure their industry even more. “We’re going to continue to see more bills on this issue in 2013, said Pelosi. “I am hopeful that we can win in every state, but we’re prepared for a major pushback from the other side.”