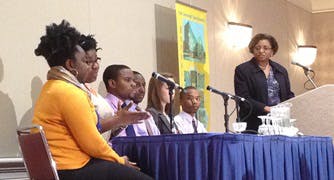 North Carolina A&T held its fifth annual Urban Education Institute March 7-9. The theme for the convention was Improving STEM (science, technology, engineering, mathematics) Success in Communities of Color. The three-day event drew educators from universities such as  Harvard, Rutgers and Howard as well as more than 100 high school students from all over North Carolina to discuss strategies for drawing more minorities into STEM-related fields of study.

After two days of sitting in plenary sessions with experts like Penn State’s Jose Fuentes and Syracuse’s George M. Langford, the students took center stage as the program drew to a close. Six students, ranging from a high school freshman to second-year graduate school students, spoke about their experiences in STEM studies and shed some light on where they felt the future of their field might be headed.

High school senior Gerrell Bynum’s initiation into STEM studies came out of a desire to know how the video games he loved worked.

“I wanted to know how we made those work, but not how to just play them,” he said. “It’s all about knowing what you want to do as soon as possible, and then striving to achieve that goal.”

A&T’s Phillip Thomas wasn’t as clear on what he wanted to do when he arrived on the Greensboro, N.C., campus. The junior biology major said an interaction with a high school student during his time as a research intern at Johns Hopkins really opened his eyes to how important it is to identify STEM as a career early on.

“If I would have known about these things earlier, things probably could have went a lot smoother,” Thomas said. “Developing that passion at a young age is really important because there are a lot of things you can accomplish along the way.”

The panelists were also asked to speak about what kind of advice they would give to students potentially interested in pursuing a STEM-related career path.

“You have to be open to trying new methods of studying, and new ways of getting information from your students and peers,” she said. “That takes some maturity to discipline yourself into doing what you need to do.”

Thomas agreed with Kelley’s assessment, advising students of the personal sacrifices they will be required to make to be successful in STEM studies.

“As a STEM major, you have to realize you’re no longer a regular student,” he said. “The things that you see other students do, you just can’t go out and do.”

As a graduate student at A&T, Tonisha Coburn has been on both sides of the equation. Coburn said she employed an innovative learning method designed to engage students when helping instruct a biology class of non-majors.

“The first day of class, instead of going through safety procedures, we had them do a picture challenge,” she said. “And they loved it.”

Bynum told the audience that the tools necessary to engage the learning process are already available and are just waiting to be put together. As a teacher’s assistant in one of his classes, he saw that none of the students were asking questions, so he suggested the teacher create an Ask.Fm account for the class, which is a social media program that allows users to ask questions anonymously and thus eliminating a fear of embarrassment.

“Simple stuff like that can be used to try to reach out to students,” he said. “It’ll be a lot easier for them to incorporate their education with their entertainment, instead of having education on one side and entertainment on the other.”

Floyd said she was pleased to see the convention’s growth from a local session to a national event, noting that year’s convention had more than 300 participants. She said increasing STEM membership is a necessity across the board.

“It’s a matter of economic perseverance and performance for the future,” she said. “If we’re going to survive as a nation, then we’ve got to do better at educating our children in math and science.”