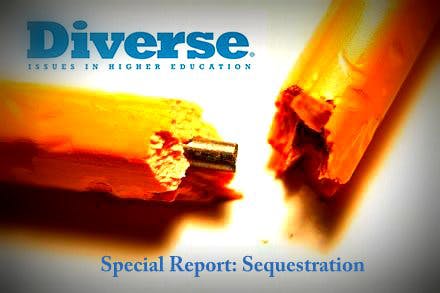 Diverse continues to chronicle the effects of sequestration on higher education.

For years, Historically Black Colleges and Universities or HBCUs have boasted that they can do more with less. But sequestration could reduce the coffers of institutions that already have few resources.

Across-the-board cuts in federal spending would reduce Title III funds by 5 percent. In fiscal 2011, 95 of the schools received approximately $237 million in Title III Part B funds. The money underwrites a host of programs: student services, faculty and staff development, construction and improvement of campus facilities, and outreach programs that prepare students for college

Work study and other student aid would take a similar hit. The latter could have students scrambling to make tuition—a crucial source of revenue for the country’s 105 HBCUs.

Marybeth Gasman, a professor at the University of Pennsylvania who studies HBCUs, said the schools would be hard-pressed to come up with extra money for those programs.

“(HBCUs) would have to immediately start looking for other funding in order to keep some of their student-success-related programs working at full speed,” she said.

Like their counterparts at other institutions, administrators at HBCUs are waiting to see exactly how the budget cuts will take effect. Although sequestration began on March 1, many colleges and universities won’t feel the hit until they receive awards for fiscal 2013.

The reduction is a $1.2 trillion package of cuts to discretionary and military programs spread out over the next 10 years. Legislation authorizing the cuts was passed two years ago and was designed to force Congress to reduce the national debt by presenting an onerous alternative. Instead, Congress and the president have deadlocked over the path to fiscal solvency. Republicans are pushing program cuts, while President Obama wants tax hikes to be part of the strategy.

The HBCUs educate about 9 percent of African-American college and university students according to the latest available statistics from the Department of Education.

“Title III funding also allows our institutions to initiate new programs, whether it’s online learning programs or a continuing education,” she said. “Those dollars are flexible. You can start new programs to help your retention rates, so Title III is extremely important.”

Hogan called financial aid a “tremendous source of concern” for students attending the college that is near Jackson, Miss. She estimated that well over 90 percent of the school’s 972 students need some sort of aid. She said that money determines whether a student leaves with a diploma and how long they stay in school.

“Even a $2,000 difference between what a student has available to help with their education and what they need to have available, that can still impact the time frame during which they can complete their education,” she said. “Many students have to drop out or they have to work or take fewer hours. That affects their graduation rate and affects the college’s graduation rate.”

Hogan said the college has spent the last two years strengthening its fundraising appeals to alumni, corporations and foundations. Those efforts will double now that sequestration is threatening other funding sources. Still, she noted that the stalled economy makes raising money difficult.

“That’s a challenging kind of undertaking, because with the economy still kind of struggling, some groups are giving, but people aren’t sure what the economy will do.”

About one-fourth of Tougaloo alumni contribute to the annual fund, Hogan said. The percentage hovers near the national average for overall alumni giving but is high when compared to other HBCUs. Gasman says the alumni-giving rate for public HBCUs is about 5 to 7 percent, and 9 to 11 percent for private institutions.

“HBCUs haven’t relied on alumni as much because they felt like their alumni didn’t have access to capital,” Gasman said. “But now you’re in a situation where African-Americans have $1 trillion in buying power.  So it is very, very possible to be able to tap some of that money.”

But increased giving rates aren’t a panacea. Gasman noted that, although Fisk University has one of the highest alumni giving rates among HBCUs, the school is still economically fragile.

Gasman said many colleges approach foundations and corporations, but these entities have donated to HBCUs at much lower rates than they have to majority institutions. Finally, she said, the schools don’t have large endowment funds that can provide a financial cushion.