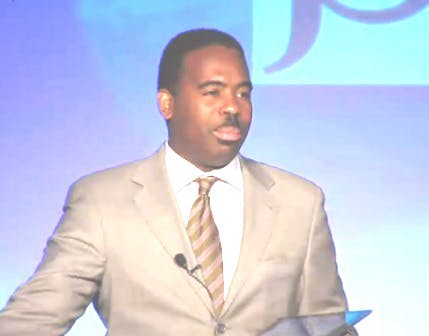 Robert Blaine and Jackson State University are trying to keep pace with the way students learn.

In the opening day of a national conference on cyber-learning, Jackson State University faculty members, administrators and students took the opportunity to spread the word about the university’s iPad and e-textbook initiatives.

“This has been a four-year journey that we’ve been on in examining digitization and the modern student learner,” said Dr. Robert Blaine, the interim associate dean of the College of Liberal Arts and director of the Global Inquiry Faculty Teaching Seminar at Jackson State University (JSU).

On Thursday morning, Blaine welcomed roughly 120 students, faculty members and administrators from around the U.S. to the two-day “Democratization of CyberLearning — Trailblazers Summit” being held at the Mississippi e-Center at JSU. University officials have been eager to share information about the school’s iPad and e-textbook programs and to partner with other institutions on cyber-learning projects, according to Blaine.

“What we’re really trying to do is to initiate a national conversation on what learning is in the 21st century. We realized that students are different now. They grow up in a digital world and they don’t learn the same way students did 40 years ago,” Blaine told Diverse.

“Through the summit we’re trying to (organize) a consortium of universities that are looking at 21st century learning and we really want to be a leader in that discussion,” he said.

In September 2012, the Mississippi e-Center purchased iPads to equip more than 900 JSU freshman students with the highly popular tablet computer. Under the Technology Advantage Scholarship Initiative (TASI), an iPad has been granted to each freshman student without charge. The Jackson State program is said to be the largest such initiative at a U.S. public university. Early data show the initiative has helped boost student academic performance and has improved JSU’s retention of freshman students following their first semester, university officials say.

Charence Wright, a JSU freshman from Atlanta, told summit attendees that getting an iPad from JSU has been the first time he’s owned a mobile computing device on which he can complete his academic studies. The iPad “has advanced my college career,” he said.

“I write papers on it; I do programming. … It’s really been a great thing for me. I do appreciate Jackson State for giving me an opportunity to have an iPad,” Wright remarked.

In his opening remarks at the summit, Blaine shared the news that the school’s newly-launched e-textbook program, which supplied 500 students immediate electronic access to textbooks, saw a modest boost in the mid-term academic performance by program participants.

“In one semester, we saw a 6.5 point rise in test scores by the mid-term for all of the students that we piloted,” he said.

Blaine traced the jump to the fact that the financial aid delivery at the university often results in a three- to four-week delay when students are able to purchase their textbooks in a given semester. With the pilot program enabling immediate textbook access, participating students were able to stay focused on their studies in the early weeks of the semester, according to Blaine.

Dr. Candis Pizzetta, an assistant professor and the coordinator of the graduate program in English at JSU, is one of several university faculty members participating in the Global Inquiry Faculty Teaching Seminar (GIFTS) program, which has led to the development of faculty-produced e-textbooks. During the summit, Pizzetta talked about the challenges of using e-textbooks in her English department classes. One challenge was that she and her students “had to stop thinking about the e-textbook as a book, or the digital text as a textbook, because they are very different,” she explained.

“It’s not just the formats are different, but when students approach (digital texts) they no longer are thinking in linear terms, (and) no longer thinking about reading from beginning to end. They jump around in their reading,” she told Diverse. “Instead of being confined by the text, their understanding of the subject really blossoms when they were able to be creative in their research about the subject.”

In addition to Pizzetta, other JSU faculty members spoke about their classroom experiences while utilizing either the iPad or making use of e-textbooks.