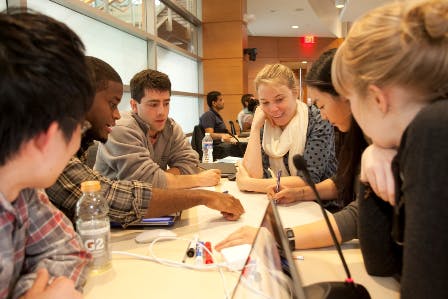 Duke University can better support minority students in science majors thanks to a $1.8 million, five-year grant from the National Institute of General Medical Sciences (NIGMS).Angelical Martin enjoys the collaborative exchange of knowledge and ideas in the scientific field, but as a second-year Duke University graduate student studying cellular and molecular biology, the Detroit native is often left feeling isolated and unable to relate to her peers.

“Science is hard and lonely,” says Martin. “Countless times I experienced self-discouragement and self-doubt because I didn’t see people in academia that looked like me or talked like me.”

Minority students such as Martin often find it challenging when pursuing specialized careers to adjust to an environment that traditionally is predominantly White and male. Duke University found that many of its minority undergraduate students enrolled in science majors only to exit the program before graduating. Its graduate students entered at a lower rate but remained in the program longer.

Now, the prestigious college can better support minority students like Martin thanks to a $1.8 million, five-year grant from the National Institute of General Medical Sciences (NIGMS). In May, Duke used the award to launch the Biosciences Collaborative for Research Engagement (BioCoRE) program to promote diversity and develop scientific talent while addressing undergraduate retention and graduate school recruitment.

“Science is important, but how you learn it and apply it comes from the individual, so it’s important to support the individual,” explains Martin. “It’s really critical for the success of students such as me.”

To ensure the success of minority students, the program focuses on social and community programming to help students form strong bonds, share ideas and leverage resources, explains Sherilynn Black, director of Duke’s Office of Biomedical Graduate Diversity in the School of Medicine and co-leader of the grant. The BioCoRe program involves personalized mentoring and career development initiatives. Networking and skill development are aimed at increasing the number of minorities in science in a way that benefits the entire community. Hands-on experiences through paid internships in a scientific lab, and full integration with other campus programs will also create a tangible connection for the students, says Black.

“We want to build self identify that’s necessary for students to succeed,” she says.

Other benefits include a new freshman seminar, called “Pathways to Biomedical and Biological Research,” to help first-year students tap into undergraduate research opportunities and build a sense of community; a two-day symposium that enables students and faculty from around the state to conduct workshops, mentoring and education sessions, and a one-month stipend for graduate students to arrive to campus early to start with labs. As the program unfolds, more initiatives will be implemented to expand student involvement nationally and internationally.

The BioCoRe program is Duke’s first award from the National Institutes of Health’s Initiative for Maximizing Student Development (IMSD). Grant administrators expect the award to support up to 10 undergraduate students in each class, plus about 20 graduate students each year. IMSD aids student development programs and internships that promote and encourage more students from underrepresented groups to pursue careers in biomedical and behavioral research.

The upward trend is encouraging for Black, who plans to change the culture at Duke by helping minority students feel supported, engaged and included. The BioCoRe program will integrate students from the Pratt School of Engineering, the School of Medicine, the Graduate School and Trinity College of Arts & Sciences.

“When you bring all the students from different departments together, it creates a cohesive community that wouldn’t exist otherwise,” says Black. “Having undergraduate, graduate and a community component will produce a holistic and beneficial experience for all participants involved.”

Martin agrees and says the value of peer-to-peer and faculty mentoring has been priceless.

“I cannot emphasize enough the importance of familiarity and accessibility in one’s environment,” she says. “It was really important for me to talk about what I’m experiencing with people who are also experiencing similar things.

“What we experience is different, and it’s real,” adds Martin. “[The program] has helped me to feel more comfortable as a minority and woman scientist.”