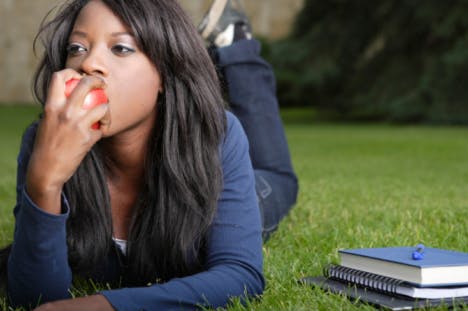 Hamburgers, hot dogs and pizza are staples in most college cafeterias, but as more Americans explore alternative eating habits, a growing number of colleges and universities nationwide are responding to the call for healthier, non-meat food options.

Though schools like the University of California—San Diego and the University of North Texas are expanding their dining options with a vegan “eatery lounge” and an all-vegan dining hall, respectively, Oakwood University has long been ahead of the curve. Based in Huntsville, Ala., the historically Black Seventh-day Adventist institution reportedly stands as the only HBCU with a meat-free dining program and is the only vegetarian university in the state.

According to a 2013 report by food service consultant Technomic, only 35 percent of students nationally reported satisfaction with their schools’ dining programs. About half of survey respondents said they were looking for greater flexibility in their dining options.

“A lot of people are becoming more health-conscious,” said David Knight, vice president of student services at Oakwood. Satisfaction with the school’s dining program increased from 17 percent in 2011 to 71 percent, due to input from the student advisory committee. The college is among 7,800 Seventh-day Adventist institutions that feature a vegan bar and a market area where students can feast on a selection of meatless treats on-the-go.

“The health message permeates through all Adventist life of home, church and school,” he said.

The Seventh-day Adventist Church stresses health and holistic living through dietary restrictions, a day of rest known as the Sabbath, moderation in activities and no use of tobacco, alcohol or illicit drugs. The recommended diet includes a generous amount of whole grain breads, cereals and pastas, fresh vegetables and fruits, legumes, nuts and seeds. It can include low-fat dairy products such as milk, yogurt, cheeses and eggs. The Seventh-day Adventist lifestyle also emphasizes exercise, eating nuts, social support and attending church regularly.

According to the Adventist Health Study-2 conducted by the Loma Linda University School of Public Health, people who eat a vegetarian diet live longer than those who eat meat. The 96,000 survey respondents reported lower risk of heart disease, several cancers, high blood pressure, arthritis and diabetes than other Americans. Vegetarians and vegans tend to consume less saturated fat and ate more fruits and vegetables, beans, legumes and nuts. An estimated 35 percent of Adventists are milk and egg-using vegetarians, according to Loma Linda.

The message of good health should resonate louder in the African-American community where health disparities loom larger, said Knight. African-Americans are at greater risk for illnesses such as diabetes, high blood pressure and strokes, often because of their diets.

“We are an HBCU, so we must stop killing our brothers and sisters when it comes to salt, fatty foods,” he said. “We talk to people about drinking and drugs, but not about obesity. We become silent killers because we allow certain health messages to get by.”

Since adopting a vegetarian diet four years ago, Oakwood student LaToya Bunting says her health has improved dramatically. Symptoms from her childhood epilepsy seem to have lessened. Her stamina and energy have increased, and her appetite is not as ravenous.

“I know what’s good for my body,” said the senior elementary education major. “Eating healthfully is one of the best ways in which I can glorify God with my body.”

The Detroit native enjoys the large selection of foods found on campus such as tofu stir fry, taco salad, lasagna and a buffet of soul food.

“It was a welcome relief not to look at menus and make substitutions,” said Bunting. “You don’t have to pull apart a dish to make it your own.”

Trevor Fraser of Oakwood’s School of Religion said the Bible serves as guide for all aspects of life, including diet. The initial guidelines for Oakwood’s menu stem from Genesis, when Adam and Eve ate grains and seeds from the ground. After the flood, man was given the option of eating meat, explained Fraser, but only clean meats such as cows, chicken and fish with fins and scales. Still, there is no scripture that states, “Thou shall not eat meat.”

“If you want to eat meat, you certainly have reason to do that; it wouldn’t be against the Bible,” said Fraser, a professor and coordinator for Master’s of Pastoral Studies. “We’re looking at a better approach to spirituality and health … what will produce a greater impact on one’s life.”