U.S. Trails Behind Other Countries in Eliminating Educational Disparities 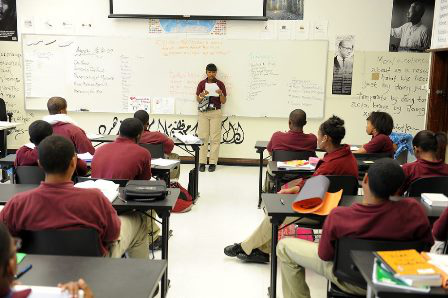 When it comes to educational performance among advanced nations, the United States remains in the middle of the pack. But when it comes to eliminating educational disparities between poor students and their more affluent peers, the U.S. lags behind “many other countries.”

Those are among the key findings from the latest version of the Programme for International Student Assessment or the PISA 2012 Results.

The report, released Tuesday by the Organization for Economic Co-operation and Development, or OECD, notes that 15 percent of the variation in student performance in the United States is “explained by students’ socio-economic background,” which is “similar” to the average student performance among OECD countries that are the focus of the PISA report.

However, this contrasts with less than 10 percent in a number of countries and economies that include Finland, Hong Kong-China, Japan and Norway, “all of which had higher or comparable math, reading and science scores,” the report states.

“In other words, in the United States, two students from different socioeconomic backgrounds vary much more in their learning outcomes than is normally the case in these other countries,” the report states.

While the link between the socioeconomic background of students in the United States and their performance on educational tests is nothing new, the PISA report goes further by highlighting how other countries with similar amounts of poverty don’t experience the same educational disparities, observes Aaron Pallas, a sociology and education professor at Teachers College, Columbia University,

“What the report does say, or at least implies, is that we can’t attribute the U.S.’s overall middle of the pack performance to the fact that we have a lot of students in poverty because there are plenty of other countries that have lots of students in poverty and some of them are doing better than us,” Pallas said.

However, added Pallas, figuring out which resources matter most is “a tricky thing” because most of the things that are easy to measure—such as how many teachers hold master’s degrees or how many books there are in the school library—are not strongly related to student academic performance.

The report notes that better performance cannot be bought.

The report, which focuses on the educational performance of 15-year-olds in math, reading and science, shows the United States as middling when it comes to academic performance.

For instance, the United States performed below average in mathematics in 2012 and is ranked 26th in the world, while the nation’s performance in reading and science are both “close to the OECD average” with the United States ranked 17th and 21st, respectively, with no significant changes over time.

The report lists a number of reasons why educational disparities by income persist in the United States.

Among other things, not only does the United States have a higher than average percentage of 15-year-olds in single parent families—20 percent in the U.S. versus an OECD average of 13 percent—but such students in the United States “face a much higher risk of low performance than is the case across OECD countries on average.”

The report also notes that the United States has more immigrant students than other countries—22 percent versus an OECD average of 11 percent—and that such students “tend to attend schools with a socio-economically more disadvantaged profile.”

The report identifies a number of policies and practices that could help improve educational outcomes.

Among other things, the report advises against “grouping” students by academic ability. It notes that students in schools that do not practice “ability grouping” scored eight points higher in math in 2012 compared to their counterparts in 2003.

“Schools must find ways of working with students from across the performance spectrum,” the report states. “School systems that continue to differentiate among students in these ways need to create appropriate incentives to ensure that some students are not ‘discarded’ by the system.”

However, Levin advised against moving away from grouping without better preparing teachers and making the educational achievement of all students into the ethos of a school.

“A school has to be committed to that,” Levin said.