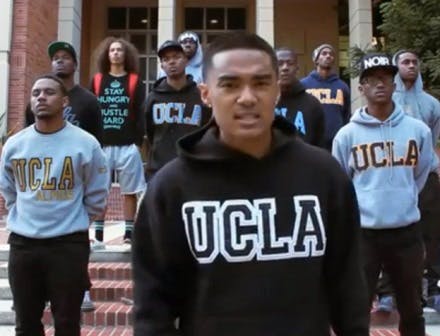 A group of UCLA students, led by Sy Stokes (center), recently posted a YouTube video voicing their concerns about the low number of Black students on campus. Black admission rates in the University of California system have declined since the mid-1990s.

The baccalaureate degree attainment rates comparing African-American and White students in California fell by just one percentage point from an 18.7-point gap in 2000 to a 17.7-point gap in 2011. This achievement gap is one of several highlighted by a Los Angeles-based higher education advocacy group in a new report on Black student college completion and achievement.

On Thursday, the Campaign for College Opportunity (CCO) organization released “The State of Blacks in Higher Education in California: The Persistent Opportunity Gap” research report, which details the lack of noteworthy progress of Blacks in California higher education. “Across all three public sectors of higher education—the California Community Colleges, California State University, and University of California—Blacks have the lowest completion rates for both first-time freshmen and transfer students,” the report states.

“Our report did find that gaps between Blacks and other ethnic groups in college-going and attainment have unfortunately remained virtually unchanged for more than a decade,” CCO executive director Michele Siqueiros said Thursday during a webinar event. “In some cases, [gaps] have worsened.”

Noting that California’s total African-American population is the fifth largest among states in the U.S., Siqueiros noted that the state’s Black community is larger than that in a number of southern states, including Alabama, Mississippi and Louisiana.

Among the report’s findings, Blacks are more likely than any other group to go to college but not earn a degree. A smaller proportion of Black adults from age 25 to 34 have earned more postsecondary degrees than Blacks between the ages of 35 and 65. And, in 2012, more African-American students in California were enrolled in private, for-profit institutions than in the California State University (CSU) and University of California (UC) systems combined. In addition, prior to the state’s 1996 ban on race-conscious affirmative action, Blacks were admitted to the UC system at a rate of 75 percent, yet today the rate has fallen to 58 percent.

“This report gives policymakers a clear sense of the cumulative impact [the lack of support has] on African-Americans seeking college degrees in California,” CCO board member Marcus Allen said during the webinar.

The report, the second in a CCO series that examines higher education attainment among California racial and ethnic groups, raises questions about how the state’s higher education system is organized and whether it serves all groups in an equitable fashion. It notes that the “persistent disparities between Black students and their counterparts should sound an alarm for Californians and our elected leaders to make a concerted effort to systematically narrow and close these gaps.”

With the report’s release, the California Black Legislative Caucus called on campus leaders at higher education institutions across the state “to address the continued low rate of enrollment at both the CSU and UC systems by African-American students, as well as their having the lowest completion rates in all three public higher education systems.”

Caucus chair and state Senator Holly J. Mitchell, D-26th, said in a statement that caucus members found the decline of degree attainment among young Black adults in comparison to older African-Americans a disturbing trend. “It means that we have failed an entire generation of African-American students and we need to ask ourselves what caused this discrepancy and ensure that we are not making the same mistakes with the next generation,” she said.

Within the report, the Campaign for College Opportunity issued the following policy recommendations:

• Create a statewide plan for higher education – Establish statewide goals and college-by-college benchmarks for increasing Black completion rates and for decreasing the number of students and time spent in pre-college courses.

• Expand “College Knowledge” – Scale proven and successful efforts to improve college knowledge, such as information about financial aid, eligibility requirements and college application process, among Black students and their parents.

• Invest in student services that boost success – Prioritize financial resources that support student success and completion, including orientation, counseling and peer learning. Improve efforts to outreach to students who are close to graduation to encourage completion.

• Fund colleges for both enrollment and success – Establish a new funding mechanism that creates incentives for increasing underrepresented minority graduation and completion rates.

• Strengthen financial support options for students – Ensure that all eligible students apply and receive federal and California student aid for which they qualify.

During Thursday’s webinar, Dr. Jamillah Moore, chancellor of the Ventura California Community College District, applauded the CCO report for recommendations she believes could help African-Americans as well as all students in California higher education institutions. “The report did a good job in really identifying what’s happening and where the dropoff is,” she said.

“One of the things that stood out for me and what I would have liked to have seen more of [in the report] is the importance of student services,” noted Moore. “The reality is that many students need more services in order to be successful.”