Despite the sharp decline in private education lending, one-fifth of student graduate debt was in private loans, which yield more risks, fewer protections and repayment options and are often more costly compared to safer federal loans.  The average student debt from federal and private loans combined increased on average 6 percent per year from 2008 to 2012.

A report released in December, Student Debt and the Class of 2012 reports a detailed analysis of significant differences in student debt across states and colleges around the country.  For example, students attending colleges in Delaware have twice as much debt compared to New Mexico, and in five states student debts reached an average of over $30,000.

“Despite discouraging headlines, a college degree remains the best route to finding a job in this tight market. But students and families need to know that debt levels can vary widely from college to college,” said TICAS president Lauren Asher. “If you need to borrow to get through school, federal student loans are the safest way to borrow. Whatever you earn, income-driven plans like Pay As You Earn can help keep federal loan payments manageable.”

State highs and lows:  On average student graduation debt ranged from $18,000 to $33,650 across all states in America.  Northeast and Midwest states remained the high-debt states, with Delaware (average $33,649) ranking the highest.  Minnesota, New Hampshire, Pennsylvania and Rhode Island all have student loan averages of over $30,000.  States in the West and South had the lowest debts, including New Mexico (the lowest), Arizona, California, Nevada and Wyoming. 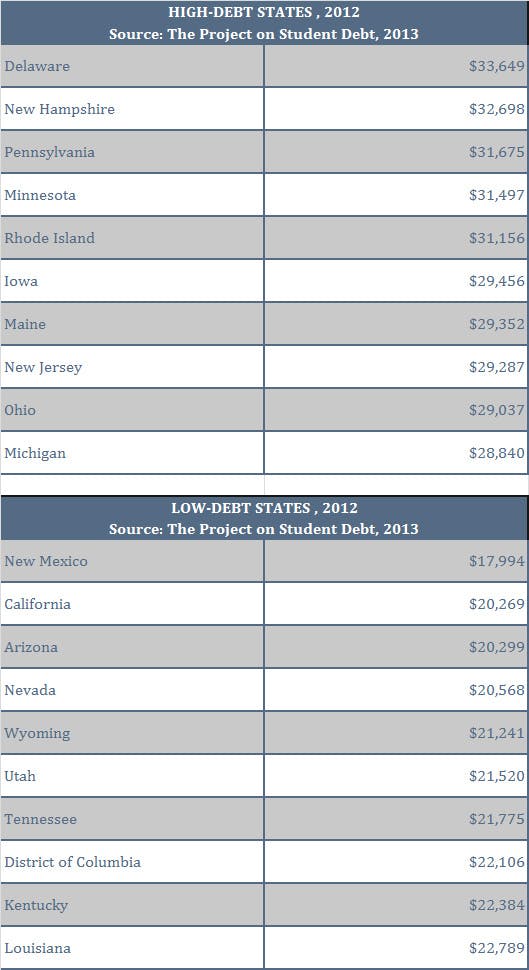 College highs and lows: Average student debt across campuses fluctuated greatly, ranging from $4,450 to $49,450; and between 6 to 100 percent of the share of all students across campuses graduated with loans.  On average, students attending colleges with higher tuition typically had higher student loan debt; however, there were instances where high-cost colleges had comparatively low student loan debt.

High-debt Colleges: the list below illustrates the colleges that reported the highest average debt for students graduating in 2012.   The list is broken into two groups – public and private colleges as tuition and fees are significantly lower at public colleges and universities.