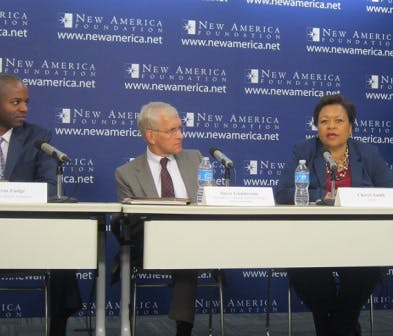 Kevin Fudge of American Student Assistance, Steve Gunderson of the Association of Private Sector Colleges and Universities and Cheryl Smith of the United Negro College Fund discuss Parent PLUS loan reform. (Photo by Ronald Roach)When changes to the Parent PLUS loan program in 2011 resulted in loan denials for thousands of families the following year, it led to a huge disruption for students whose parents suddenly became unable to pay college tuition bills.

From October 2011 to October 2012, the rejection rate for PLUS loans jumped from 28 to 38 percent, and the loan denials disproportionately affected students attending for-profit schools and historically Black colleges and universities (HBCUs).

Although HBCUs leaders have been publicly critical of the U.S. Education Department for tightening credit check criteria for Parent PLUS loan applicants, a new report released by the New America Foundation Wednesday is urging new reforms to ensure that the program does not burden parent borrowers with debt they cannot pay back. Next month, the Education Department begins negotiations with higher education organizations over changes to the eligibility requirements to Parent PLUS Loans.

“The Department was right in trying to prevent parents from borrowing loans they might not be able to afford … If anything, the Department’s changes were too modest,” according to the New America Foundation’s “The Parent Trap: Parental PLUS Loans and Intergenerational Borrowing” report.

The report’s author, Rachel Fishman, a policy analyst in the foundation’s Education Policy Program, said Wednesday during the “Parent PLUS or Minus: Promoting or Putting Parents at Risk?” forum that despite the U.S. Education Department’s poor handling of credit check changes the move represented a step in the right direction.

“Without a doubt, as I was reading all these anecdotes and hearing from HBCUs and students, implementation of the credit change was totally bungled,” by the U.S. Education Department, she said.

“It left students scrambling in the middle of their academic careers with trying to find the funds to remain in school and that never should have happened. But the underlying motivation of the department was strong,” Fishman told the nearly 100 people who attended the forum in downtown Washington.

Among the report’s recommendations, Fishman wrote that policymakers should consider one of the following three options:

2) Cap Parent PLUS loans. Loans should be capped to prevent over-borrowing and to remove the incentive for institutions to raise their prices. Unlike federal Stafford loans, which are capped at between $5,500 and $7,500 a year per student, Parent PLUS loan applicants can annually borrow up to the full cost-of-attendance (COA) at an institution.

With the exception of UNCF’s Smith, forum participants said they favored the New America recommendation for capping the Parent PLUS loans to prevent over-borrowing by parents. Smith said that beyond anecdotes over-borrowing has not been established as a crisis for low-income parents. UNCF is awaiting a decision by the Education Department on whether the HBCU support organization will be able to have a representative officially participate in the agency’s Parent PLUS loan talks next month, she noted.

“I think just before committing to radically changing the program we need to understand what the impact of that change would be,” Smith said. “And if that change were made it would need to be made in concert with other changes like raising the limits on Stafford loans, which go directly to students.”

Smith told Diverse that UNCF is critical of the report’s tone and assertion that some HBCUs may be “steering students away from lower-cost federal student loans and toward Parent PLUS loans to avoid penalties” that result with high default rates in the lower-cost student loan programs.

“I would say there’s no substantial evidence that this is a widespread practice,” she said.