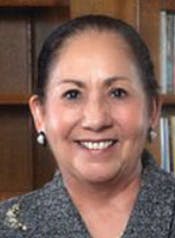 García became president of The University of Texas at Brownsville in January 1992. When she was named president of Texas Southmost College in 1986, she became the fi rst Mexican American woman in the nation to become president of a college or university. García has advocated increasing access to higher education through innovation and experimentation, and, under her leadership, UTB’s full-time student enrollment has nearly doubled. Time magazine named her one of the 10 best college presidents.