Higher Ed Experts Advocate Use of Technology to Promote Globalization 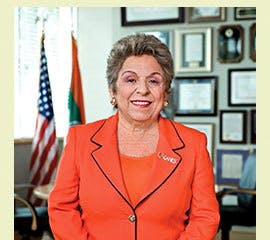 University of Miami President Donna E. Shalala says that the future of the four-year university will partly depend on how expensive education becomes.

MIAMI ― Despite being president of the University of Miami, Dr. Donna E. Shalala hasn’t strayed far from her teaching roots. The former secretary of health and human services under the Clinton administration regularly teaches a popular class called the “Politics and Economics of Health care” which draws in nearly 300 students.

“I introduce technology in my class through Skype,” says Shalala, who regularly beams in some of the country’s most prominent policymakers into her class. “It’s the integration of technology that is so important.”

Shalala appeared on a panel titled “Will Higher Education Survive the 21st Century?” at the British Council’s Going Global conference taking place this week at the Miami Beach Convention Center. The discussion, moderated by Molly Corbett Broad, president of the American Council of Education (ACE), featured several other higher education leaders from around the globe who discussed the need for the use of technology, among other tools, to help promote globalization in and out of the classroom.

But technology alone, the educators warned, cannot replace sound pedagogical classroom instruction. “The technology is the medium,” says Dr. Pankaj Chandra, a professor of operations and technology management at the Indian Institute of Management Bangalore. “But the medium is not the message.”

In an age when globalization and technology advancements are creating a new playing field for higher education, institutions across the world are struggling to raise academic standards amid soaring college costs.

Broad said that the recent economic recession in the U.S. has taken a dramatic toll on both public and private institutions. For example, at the University of Miami — which boasts a student population of about 16,000 — the average student graduates in four or five years with about $26,000 in student loans.

Dozens of high school students, Shalala says, often write her every year in hopes of getting more in scholarship before deciding on whether to enroll at the university. “I love being hustled by 17-year-olds who say they’ll attend for another $5,000,” she joked, adding that the future of the four-year university will partly depend on how expensive education becomes.

The same is true for study abroad opportunities.

While the panelists say that it’s important to push cross-cultural exchange programs on respective campuses, at top-tier research universities in the U.S. like the University of Miami, such programs have often taken a back seat to other competing faculty interests, says Shalala.

“Everybody has struggled to get their faculty on airlines,” says Shalala, adding that research faculty are often expected to engage in rigorous scholarship in their particular discipline, leaving little time for them to teach a course at another university abroad. “It’s not easy when you consider all of the demands on the faculty.”

Unlike other institutions of higher education around the world, the unique system of shared governance in the U.S. has allowed for faculty to have a greater voice in the day-to-day functions of the university.

“The faculty has to buy in one way or another,” says Shalala, who added that efforts to promote international education at the university has to be a part of an institution’s mission and fully embraced by faculty members. “It can’t be dictated from the top down.”