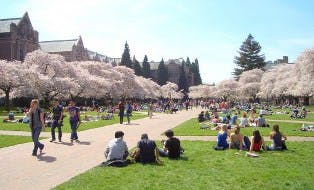 SEATTLE ― A group of University of Washington students wants to find a way back to the days when students could afford to work their way through college.

They are taking their case to the Legislature, calling for more financial aid and lower tuition.

The plan is laid out in a new report titled “Meet Us in the Middle: Affordability for the Working Student,” The Seattle Times reported Tuesday.

The report assumes many students will put themselves through college, with little help from their parents. But because the cost of college is so high now, it’s no longer possible for students to pay their own way without large student loans.

“What we feel has been under-recognized is the amount a student directly contributes to their education,” said Michael Kutz, president of student government at UW.

Including living expenses, the cost of a year of school for an in-state student living on the UW-Seattle campus is about $27,000.

“College is not affordable until students from every income group can afford the full cost of education by working,” Kutz said.

A student who works 40 hours a week in the summer and 20 a week throughout the school year can earn only about $11,500, before taxes, students estimate. At the state’s minimum wage, currently $9.32 an hour, a student would have to work 54 hours a week for a year to pay for one year at the university.

“They are really raising an important issue … which is that, not all that long ago, a student could work a summer job and some part-time work and pay for college,” said state Rep. Gerry Pollet, D-Seattle, vice chairman of the House Higher Education Committee.

State Sen. Michael Baumgartner, R-Spokane, called student-loan debt a threat to the American dream. He wants to see tuition at state schools cut nearly in half. “The model we need to get back to is the no-debt model,” he said.

Tuition has gone up dramatically since 2008 as Washington lawmakers cut state dollars going to higher education by about 50 percent during the recession. With the Legislature’s encouragement, Washington’s public colleges and universities made up the difference with steep tuition increases.