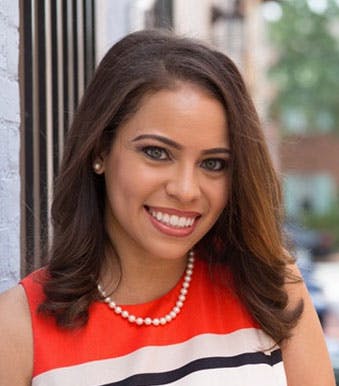 Amanda Washington said she became an educator “to get in the trenches of education and address why some schools had resources and others did not.”

With this year marking the 60th anniversary of the landmark U.S. Supreme Court case, Brown v. Board of Education, that declared separate public schools for Black and White students is unconstitutional, a great-great granddaughter of influential educator Booker T. Washington talked with Diverse about following her family’s legacy and her experience as an educator. Today, marks the 50th anniversary of the signing of the Civil Rights Act of 1964 that outlawed discrimination based on race, color, gender or national origin. As Amanda Washington carves her own path, a Master’s degree candidate at Columbia University Teachers College (Education Policy) and an intern with the White House Initiative for Educational Excellence for African Americans (WHIEEAA),  she sees a future in challenging what many consider the civil rights issue of our time.

Q: How has the family legacy and history influenced your career aspirations?

A: I’ve always been interested in education at an early age. My stepfather worked very closely with the civil rights attorney from Richmond, Va., Oliver Hill Sr., who was the Virginia counsel for Brown v. Board of Education. Back when I was in elementary school, I used to go to Oliver Hill’s house, where I was privy to stories about Brown v. Board and his time with Thurgood Marshall. At an early age I became interested in not just their stories, but the progression of academics and education within our community.

Initially, I wanted to go to law school, but, after I graduated from Spelman College, I joined Teach for America where I taught in Philadelphia and Northeast Washington, D.C., to get in the trenches of education and address why some schools had resources and others did not. One student in Philadelphia told me that “Everybody knows that you have to be White to succeed.” At that point it was not necessarily about the legacy of Booker T. Washington; it was more about what I saw growing up in Richmond and what I experienced in Philadelphia. Those systematic disparities in education stayed with me.

I was told about my family legacy that I am very proud of it but it was my recent work and research on Booker T. Washington and W.E.B. DuBois that further captured my interest. I actually think that it is a shame that people pit Washington and DuBois as antagonists. In our generation, both of their philosophies are relevant, and pitting these men against each other is not going to help the education system progress.

Q: If Booker T. Washington were alive today, what do you think he would say about the state education for African-Americans?

A: If Booker T. Washington were alive today, I believe that he would agree with President Obama’s promotion of STEM education. In fact, given the educational context of today and the 1970s’ incorporation of James Asher’s Total Physical Response in the classroom ― I believe that he would advocate for STE(A)M education, as well, which incorporates the arts into science and tech curriculum.

Q: At a recent Juneteenth Seminar hosted by The Library Company of Philadelphia, Reverend Mark Tyler, pastor of Mother Bethel African Methodist Episcopal Church in Philadelphia, said that many of the same racial inequality issues that prompted Brown v. Board of Education still exist today and that the education system for Blacks is the new civil rights issue of this generation. Would you agree?

A: I think there are similarities. While I do think that the education system for Blacks is the civil rights issue of our time, I would not necessarily spin it as a new civil rights issue of our time. Specifically, there have been people who have died for our community’s right to an equal education. Frederick Douglass said in the mid-1800s, “Once you learn to read, you will forever be free.” Nikki Giovanni said that “it’s not who you attend school with, but who controls the schools that you attend.” So I do not think that equity in education is a new issue; it is continuous and has spurred from previous generations. Therefore our responsibility is to continue to fight for equity, which will start to combat other unequitable issues like health care, housing, and the criminal justice system.

Q: Some say that historically Black colleges and universities are not as relevant as they could be. How would you respond to that?

A: As a graduate of an HBCU myself, I would definitely say that Black colleges are relevant. They serve both historical and present-day purpose as pillars of the African-American community and continue to remind us of the progression that our community has made. They also provide opportunities for students who might not otherwise have the chance to go to college.

People that compare HBCUs to majority institutions are looking at different systems of education; neither is superior to the other, they just provide different educational experiences. Both should continue to update curriculum, teacher strategy and assess student outcomes. Change does not mean forgetting the past and that is the significance of HBCUs.

Q: If you could wave a magic wand and single-handedly fix something about the education system for African Americans in America, what would you change?

A: Not just for Black students but for all students, funding is key to opportunity, especially for HBCUs and for K-12 schools for the underserved that lack resources. I would allocate funds to underserved schools so students can adequately compete in a world that graduates students from majority institutions with unlimited resources.

Q: The legacy of your family is quite significant to education and Civil Rights in America and today marks the 50th anniversary of LBJ signing the Civil Rights Act of 1964. What do you plan to do to continue what your great-great grandfather started at Tuskegee? What legacy do you want to leave for the next generation?

A: I believe that Booker T. Washington was a significant figure in American history but I also had other influences like my grandmother who was also a teacher. I hope to leave a legacy similar to theirs.

Q: Since you hope to become a president of an HBCU, what is the biggest misconception about historically Black colleges?

A: The notion that Black colleges are not going to prepare students for the world, the way that Harvard and Yale would. Spelman College taught me that I am a woman of color and I need to embrace that. I got an education that I would not have received anywhere else. Not better than, not worse than, but not the same either. The misconception that HBCUs are not relevant or that they do not educate our students at the same level as a majority institution would.