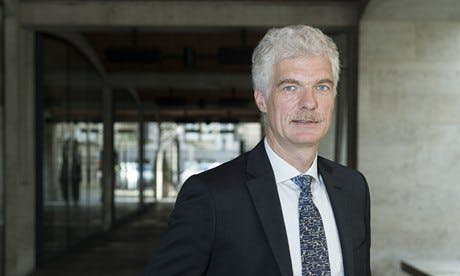 Andreas Schleicher, head of PISA, said one issue is that “math education hasn’t adapted to the changes of the world.”WASHINGTON — American education must evolve to ensure that students are better able to navigate an increasingly complex financial landscape — one that they will traverse from the moment they take out their first student loans until their sunset years when they must tap their retirement funds to survive.

That was the message that a series of education researchers and Obama administration officials delivered Wednesday on the heels of the release of the first financial literacy assessment from the Programme for International Student Assessment, or PISA.

The PISA results show that among 15 year olds worldwide, American students are “around the average” of the 13 OECD countries and economies that participated in the assessment.

Andreas Schleicher, head of PISA, said students in Shanghai-China outperformed others even though they hadn’t been exposed to the specific content on the PISA assessment.

Instead, he said, students in Shanghai possessed the “thinking skills” necessary to extrapolate and solve the financial problems before them.

The United States, on the other hand, came out in the middle of the pack, doing slightly better than the Russian Federation, France and Spain, according to the results.

Schleicher said American education must evolve to meet the demands of things financial in contemporary society. He questioned, for instance, why trigonometry — despite the prestige with which it is held — is still stressed when one of its original purposes was to measure fields during the days of agriculture.

“Math education hasn’t adapted to the changes of the world,” Schleicher told a group of several dozen who had gathered at George Washington University to discuss the new PISA literacy results.

U.S. Secretary of Education Arne Duncan said the PISA results that show American teenagers as average on a global scale were “sobering.”

“I think we in America should aspire to be better than average,” Duncan said.

“Why is average not good enough?” Duncan continued. “Our economy has changed so much, and the idea of young people going into the world of work, working one job and then [living off of a] pension, those years are gone.

“To be secure in retirement and take care of your family, you have to have a level of financial literacy that wasn’t previously required,” Duncan said.

John W. Rogers, chairman the President’s Advisory Council on Financial Capability, said the issue is particularly pressing for Blacks and Latinos, whom prior research has shown tend to save less for retirement than Whites.

“We have to make sure we don’t forget about communities that are most challenged,” Rogers said.

The PISA financial literacy results released Wednesday come at a time when assessing the financial risks and rewards of attaining higher education has taken on increased importance, particularly amid rising tuitions, mounting student debt and an ongoing debate about the necessity of a college degree in an American economy whose fate is intertwined with those of economies overseas.

The results are meant to help education policymakers make more informed decisions about how to shape education systems to produce students who are more competent when it comes to matters of money, from long-term debts that involve payments on varying sorts of interest, to understanding investments and the ups and downs of the financial marketplace.

A key idea is to identify best practices and implement what works. The results are also seen as a rich repository of information that could provide both fodder and inspiration for future research.

Panelists said there are lessons to be learned from other countries, and that researchers should strive to identify the causalities behind various nations’ higher levels of financial literacy.

For instance, Diana Crossan, a member of PISA’s Financial Experts Group and former New Zealand retirement commissioner, said it could be that New Zealand students performed well on items that involved money and transactions because New Zealand is a highly banked nation.

Support for that idea could be found in the PISA study, which found that in nine out of 13 OECD participating countries and economies, students who hold a bank account perform as well as those who do not, after adjusting for socioeconomic status.

However, in New Zealand, as well as the Flemish Community of Belgium, Estonia and Slovenia, the PISA study found that students who hold a bank account score higher in financial literacy than students of similar socioeconomic status who do not.

Schleicher, the PISA head, said infusing American education with more financial literacy content won’t necessarily make American students more financially literate. Rather, he said, the objective is to find out what skills must be taught that enable students to better comprehend financial things.