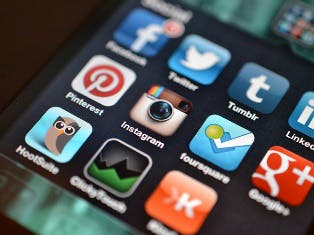 It’s about more than minding their manners. Coach Steve Mask warns players not to post about injuries, which can scare away recruiters. Committing on Twitter to a school is also discouraged—one recent former player tweeted commitments to four different schools without informing any coaches.

“He came across as being not reliable,” Mask said. “He gets a little joy out of the attention, but it’s not worth it.”

This season, Mask is taking his players’ online personas so seriously that he’s assigning an assistant to monitor their accounts. As college programs increasingly use Twitter, Instagram and other social media accounts to evaluate a player’s character, one wrong comment can cost a scholarship offer.

That was the case recently at Penn State for offensive line coach Herb Hand, who took to Twitter recently to vent his frustration with a recruit gone bad online.

“Dropped another prospect this AM due to his social media presence … Actually glad I got to see the ‘real’ person before we offered him,” Hand tweeted.

At Penn State media day last week, Hand said his wife scolded him for the tone of the tweet. Cruel, maybe, but fair.

“You want to recruit guys with strong character,” he said. “Somebody messaged me, ‘Sometimes kids are worried more about being a character than having character.’”

Yes, teens do tweet the darndest things, but Hand and other coaches say it’s usually fairly easy to differentiate between a cringe-inducing post and one that raises a serious red flag on a prospect.

“There’s a difference though when you’re talking about information that may be degrading to women, referencing drug use, and anything that has to do with cyberbullying and stuff like that. There’s certain things you don’t want to be part of your program,” Hand said.

Hand, who is one of the most active and engaging college coaches you’ll find on Twitter, is not alone in cutting off a recruit because of the player’s use of social media.

“It’s happened this year and this recruiting class,” Duke coach David Cutcliffe said. “It’s just insane what some of them think’s OK. When I know it’s them and I read it and I see some of the things out there, if I’m on the road, I’ll call a coach—let his high school coach know we’re no longer interested. And I’ll call back to (Duke director of football relations) Kent McLoud or the people in the office and say I want him dropped off the database. No more mail. Nothing.”

NCAA rules regarding contact between recruits and football coaches have become more restrictive in recent years. Coaches can’t text recruits and opportunities to meet face-to-face have decreased. As social media has become more ubiquitous, it has helped coaches fill the information gap in recruiting.

“He’s got to have a GPA that I can relate to, an ACT or SAT score or a pre-ACT score, and the third box is for social media,” Bielema.

“I distinctly remember a player last year who signed, was a big-time kid, had an interest in us, and his Twitter handle was something that I can’t repeat in here. I just kind of said, what are we doing here? This is about as obvious as it gets about what kind of thing we’re dealing with here, so we backed out altogether.”

Hand said he tries to educate high school coaches who might be behind the curve in online communication. And he often tries to educate players he’s recruiting about how to avoid social media missteps.

“If you talk to a guy and he doesn’t adjust things, that’s another red flag for you,” he said. “If they’re not going to take coaching on this, what are they going to do on third-and-short when you need them to make a block and they kind of do their own deal?”

Bruce Rollinson, who is starting his 26th season as coach of southern California powerhouse Mater Dei High School, said he added the social media talk to his routine about three years ago, borrowing some of the dos and don’ts USC gives its athletes.

South Carolina freshman defensive back Chris Lammons said he got the message in high school and cleaned up his Twitter act, despite what his friends were doing.

“In the transition from being a little kid to a man, that’s the thing you have to do, because when you’re growing up, you probably want to get a big time job somewhere and they look back at your Twitter account and they see the things you’re putting out,” Lammons said.