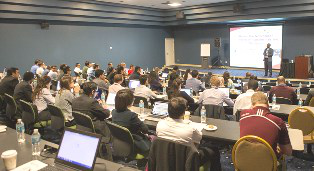 BALTIMORE ― An experiment with open-source online textbooks at several Maryland universities last semester yielded promising results, and officials are preparing to expand the program this fall.

The University System of Maryland designed the Maryland Open-Source Textbook (MOST) Initiative to evaluate the feasibility of using online materials instead of printed books to ease the cost of purchasing multiple textbooks each year.

The voluntary pilot, which was conducted during the spring 2014 semester, involved 11 faculty members at six colleges in Maryland: the College Park campus, the University of Baltimore, Bowie State University, Coppin State University, and two institutions not in the state university system: Chesapeake College on the Eastern Shore and St. Mary’s College of Maryland. Each professor assigned open-source online materials for at least one course, together reaching about 1,100 students.

The majority of participating students and faculty reported an overall positive experience and said they’d work with open-source materials again, according to the system’s recent review of the program, which was launched in collaboration with Lumen Learning LLC, an Oregon-based provider of open-source educational materials.

Students saved a cumulative $130,000 in textbook costs, based on the prices of books that would have been assigned for those 11 courses.

“Higher education needs to be more efficient at handling resources and course materials,” said Zachary McGee, a senior at Towson University and president of the University System of Maryland Student Council, which developed the idea for the MOST Initiative. “And I think this is the answer.”

University system officials are now working to increase faculty participation in the program and are discussing the possibility of creating a Maryland-based repository of open-source materials.

Daniel Gerlowski, an economics professor at the University of Baltimore, is happy to do his part. Gerlowski is not participating in the pilot, but he adopted open-source materials on his own over the summer and said he hopes to see a new model emerge for sharing materials in higher education.

“I think it’s great,” he said. “I believe it’s going to catch on. These students are paying god-awful amounts of money for books. … I’m not made of money, and I can’t believe our students are, either.”

Despite the growing interest, those overseeing the MOST Initiative said the initial results should be taken with a grain of salt.

The sample size was tiny, they said, and the faculty who participated—the so-called “early adopters”—are more likely to be enthusiastic about open-source materials or about trying something new.

Participants were not without complaints.

Most professors reported spending many extra hours preparing for a course. Students commonly griped that the online texts didn’t have as many practice problems or specific examples as printed textbooks.

Those concerns can be addressed as the program ramps up, said MJ Bishop, director of the university system’s Center for Academic Innovation, who is overseeing the program.

As more professors get involved, Bishop said, it will be easier to share feedback with peers about which materials work well and which could use some finessing.

With the help of Lumen Learning, participating faculty scoured the web to compile a hodgepodge of open-source materials, from complete course packages to a la carte readings, graphics, videos and more. Other professors chose to write their own materials.

The university system is continuing to work with Lumen, said Bishop, but their relationship will likely evolve. The initial pilot was free for the university system; it was financed by a grant Lumen received from an organization called Next Generation Learning Challenges.

Lumen helped professors choose materials and redesign their courses, provided tech and operational support throughout the semester and guided system officials in launching and evaluating the program. Bishop said those services were worth about $3,000.

But if professors request course material that Lumen doesn’t already have, the university system would have to pay the company to develop or curate new texts, Bishop said.

In addition, the university system might decide to pay for Candela Open Courses—Lumen’s platform for accessing the company’s catalog of open-source materials. So far, the catalog includes materials for more than 30 courses. Using the platform, faculty can make changes to the materials and share them with Lumen and their peers.

Access to Candela costs $5 per student. University system officials haven’t decided whether to sign up, but Bishop said she thinks the platform “makes a lot of sense.”

“The reality is, free isn’t always free,” she said. “But certainly, eliminating a $300 or $150 textbook and incurring a $5 student fee is terrific.”