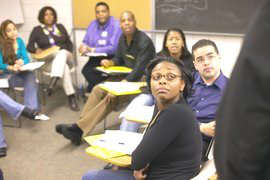 In order to help underrepresented students thrive in college, faculty and administrators must go beyond advising and instead teach students to master the “hidden curriculum” at their respective institutions.

That is the argument that University of St. Thomas faculty mentoring consultant Buffy Smith made during a recent talk about helping low-income, minority and first-generation college students adjust to the cultural shifts that await them in the world of higher education.

“When we look at mentoring and how it’s done on most campuses, we find that we do a very good job at advising,” said Smith, author of “Mentoring At-Risk Students through the Hidden Curriculum of Higher Education.”

“But if we really want to have students have equal access to the curriculum, we have to move beyond advising,” Smith said. “Advising is important, but it’s not enough.”

Instead of merely advising students—or even advocating on their behalf by reaching out to their instructors to see what the students could be doing to achieve better results—Smith prescribes a form of mentoring known as “apprenticeship.”

It involves “empowering (students) by showing them how to do things for themselves.” Smith said the apprenticeship approach is crucial when it comes to interacting with faculty, building social capital on campus, and helping students master the “hidden curriculum,” which she defined as the “unwritten, often unspoken norms, values, expectations, behaviors, codes of conduct” that are “not transparent or accessible to all students.”

“How do we help students master that? They need mentors. They need mentors who will serve as code translators of the university culture,” Smith said. “These mentors are critical for the overall academic achievement of students.”

Smith made her remarks at an Education Writers Association conference at Southern Methodist University during a presentation titled “Attitude Adjustment: Boosting Student Learning Through Mentoring and Psychology.”

She said teaching students how to navigate the university culture can lead to success both on campus and beyond college as well.

“Students need to understand how creating meaningful relationships with their teacher can actually lead to internship opportunities, stronger letters of recommendation. It’s critical to their success,” Smith said. “If they don’t have that understanding growing up in terms of their family backgrounds because they’re the first in their family to attend college, then they’re going to rely on mentors to teach them that knowledge.”

“Common sense is common to those who are common within the particular cultural context,” Smith said. “But if these are first-generation, low-income students, some cultural norms of the university setting are unfamiliar territory to them.”

Smith said colleges and universities could foment student mastery of the hidden curriculum if they focus their efforts on doing so.

Greg Walton, assistant professor of psychology at Stanford University, described successful interventions meant to prepare first-generation, low-income and minority students for the college culture before they even set foot on campus. Among other things, such programs have involved having students write essays while still in high school about what challenges they might face in college and how those challenges might be overcome.

Research has found that 43 percent of treated students in one such program stayed in college full-time versus 32 percent from non-treated students, Walton said.

But he cautioned that such interventions are “not magic.”

Instead, he said, the interventions involve a “well-timed and well-delivered message to clear psychological barriers to allow students to take advantage of resources available to them, such as mentoring.”

Walton, who teaches courses on psychology and social problems, including one called “Wise Interventions,” said it’s important to bear in mind that the worries that students bring to college are “reasonable responses to social reality.”