University of Southern California Inviting Neighbors Over for Education 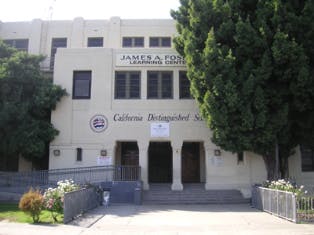 Sierra Williams is one of more than 3,000 new freshmen at the University of Southern California this fall. She is majoring in biomedical engineering, and, if the technical track doesn’t work out, she says she plans to become a doctor.

Where Williams stands out from the majority of her peers is her familiarity with the campus. That’s because she has already spent four years in high school taking classes there as a student scholar with USC’s Neighborhood Academic Initiative (NAI). “It’s pretty easy to navigate my way through campus,” she said.

NAI’s home base is the Foshay Learning Center, not far from USC’s main campus in southern Los Angeles. Williams, and 19 other NAI scholars, graduated from Foshay this spring and transferred to USC in the fall.

That cohort of 20 students makes Foshay one of the top feeder schools for USC, which enrolled its most competitive freshman class this fall. USC took only 18 percent of its applicants. Incoming freshmen have an average GPA of 3.73 and scored in the 95th percentile on standardized tests, according to a USC press release published on Thursday.

Foshay ranked third overall for the number of students it sent to USC. Just ahead of Foshay was Palos Verdes High School, located in a tony neighborhood overlooking the Pacific; and Loyola High School, a Jesuit prep school for young men and the oldest continuously run educational institution in the region.

Compared to the other top feeder schools, Foshay has far fewer resources at its disposal. Located in inner-city LA, Foshay has a high school student body of just under 700. Of those students, 87 percent are low income, and the majority are Latino or Black.

But Foshay does have the NAI, a powerful tool in its arsenal. NAI has become a game changer for inner-city students.

“If it wasn’t for NAI, I don’t think I would have applied to any big name schools,” Williams said. “It makes you feel like you have to go to college.”

In the late ‘80s, USC took a look around at its neighboring communities in southern LA and decided to take action to help local students not just go to college but successfully graduate and move on to productive careers. In 1989, the NAI was born. In 1991-92, NAI accepted its first students and graduated its first class in 1997.

The program starts in sixth grade. Once students reach high school, they reapply to the program. If they are accepted, NAI ramps up the requirements. In addition to the regular school day, students attend classes from 7:30 to 9:30 on the USC campus every morning during the school week, which explains how Williams knows it so well.

On the weekends, NAI scholars, as they are known, attend Saturday academy. During the summer months, they take NAI classes. “The sacrifices that you’re making throughout high school are worth it once you get to college,” Williams said. “But NAI, you don’t think of it as that big of a time commitment after a while because everyone in your class becomes like your family.”

Despite the significant time commitment NAI required, Williams said she found time to play soccer, softball and track in high school. At USC, she joined the club softball team.

To stay with NAI, students have to meet certain academic standards or risk being let go from the program. But students have a powerful incentive: the ones who complete the program and are accepted to USC are given full financial aid for 4.5 years.

Since 1997, the program has graduated a little over 800 students, according to Lizette Zarate, NAI curriculum and instruction specialist. “That’s huge when you’re looking at the fact that kids are coming from this neighborhood surrounding USC,” she said. “Our upcoming generations of students are transforming the landscape of the community.”

Zarate is herself a graduate of Foshay and NAI and graduated from USC in 2002. She said that, compared to when she was in high school, there is a “buzz” around college going at Foshay and other NAI partner schools. Her own experience, she said, shows that, when students and their families realize that there is a pathway to college, they will take advantage of the opportunity.

“What the NAI program did for me was that it really opened my eyes to the idea that college was a possibility and gave me the tools not only to get in and be competitive, but also paid for me to go,” Zarate said.

This year’s 20 NAI students at USC represent a historic first for both the university and Foshay.

“I’m just extremely proud of what these students have accomplished,” said Thomas S. Sayles, senior vice president of university relations at USC. “Only good things come out of programs like the NAI. It gives students the opportunity to thrive, to focus on their educational advancement; it gives them an opportunity to go to college and to pursue the occupation of their choice.”

Looking to the future of the NAI, USC representatives say they plan to continue growing. “This program, I hope, will be around forever. And I expect forever,” Sayles said.