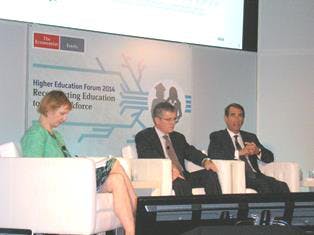 Jack Remondi, Navient president and chief executive, center, and Alan Solomont, dean of Tisch College of Citizenship and Public Service at Tufts University, anchor a panel on funding higher education.NEW YORK ― Representatives of colleges and universities and innovators in education and the workplace gathered this week at the The Economist’s Higher Education Forum to examine issues that included reducing student debt and increasing college completion rates.

The first panel discussion addressed funding higher education. Data that provided the foundation of the discussion painted a stark picture: from 2008 to 2012: 47 out of the 50 states reduced funds for higher education, the cost of college continues to rise while incomes are relatively flat and the time to repay student loans has gone from 10 years from time of graduation to nearly 20 years in some cases. It was also noted that students are also borrowing not just for tuition but also for living expenses.

Jack Remondi, president and chief executive of Navient, a loan management company, said it is imperative to fully inform students and their families before they incur debt. He would like to see a ranking system in terms of risk with regard to various elements, including the student’s intended course of study.

He emphasized the importance of assisting students in making informed decisions, noting that the University of Indiana sent a letter to returning students that contained detailed information about their debt. Understanding where they are in terms of debt load could propel students to be less careless about incurring unnecessary debt.

In order to help students be better prepared before starting college, which will cut down costs in terms of the length of time they will then need to spend in college, there should be more programs prior to entry, according to Alan Solomont, dean of Tisch College of Citizenship and Public Service at Tufts University.

The panel also called upon young people to put aside their documented general disinterest in politics to engage in the discourse in an effort to bring about changes in public policy.

In the panel The Great Mismatch: Creative solutions for connecting education to the workplace, discussion centered on the changing demographics of today’s college students. While the panelists acknowledged that traditional four-year bachelor’s program will always exist and serve a vital place in the educational landscape, they noted that many of today’s students are older and employed full time.

Gerald Chertavian, founder and chief executive of Year Up, a one-year, intensive training program that provides low-income young adults with a combination of hands-on skill development, college credits, corporate internships and support, and Dr. William Pepicello, president emeritus of University of Phoenix, discussed how to most effectively utilize emerging elements of higher education, such as online courses, to serve students’ needs.

“We should ask every student, ‘Why are you here and what is your goal coming to this institution?’” said Chertavian. “We should be held accountable for helping that person to achieve the goals they’ve set for themselves. At the end of the day, if you’re doing that for your citizens, it’s probably a pretty good outcome measure.”

After some fierce criticism and scrutiny, University of Phoenix now helps students build a financial plan before they take a single course or incur debt. Administrators have also engaged in discussion with both students and potential employers to address their wants and needs.

“In order for us to really close the jobs gap there has to be a conversation where both sides are proactive,” said Pepicello. “Businesses have to be able to articulate what it is that they need in the way of skills … so that higher education can adapt.

“In order to be successful on the higher ed part, we need to have a formalized structure to help facilitate that conversation.”

Chertavian described a program Year Up has developed, Professional Training Corps, modeled after ROTC, an innovative new program to help prepare students for the workforce. It is being utilized at Baltimore City Community College, a school with a traditionally low graduation rate, to considerable success.

“Rather than wear Army fatigues, you wear a suit. Rather than study military moves, you study Microsoft mouse moves. Rather than going on a field training exercise, you go on an internship,” Chertavian said. “They are holding themselves to higher standards. They are proud to look and act as professionals. They recognize a professional learning environment is in their interest.

“Often at community colleges, we haven’t felt like we had the right or responsibility to talk about attitude and behavior, which ostensibly someone needs to learn in an educational setting if you’re not getting it in a community setting or in your home.”