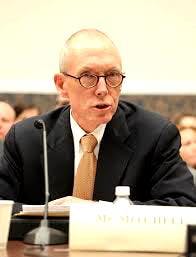 Ted Mitchell, undersecretary for higher education at the U.S. Department of Education, is concerned about the effect skills-driven programs might have on mobility in society.When Cheryl Hyman, a former utilities executive, was tapped to become chancellor of the City Colleges of Chicago, the system of seven community colleges had a graduation crisis: Only seven percent of students were finishing their educations in a timely manner.

Hyman came in with an idea to fix the problem—the system needed to focus on teaching skills employers were demanding.

Graduation rates doubled after Hyman put her policy in place. But it put her in the middle of a debate over the very purpose of higher education.

On one side are those who embrace aligning higher education with the needs of employers. The other side argues that such a shift would block countless students from the richer offerings available in traditional liberal arts settings.

Speakers at a conference in New York hosted by The Economist mostly lined up behind the idea of providing workplace skills.

The changes at the City Colleges of Chicago started with a study of what industries were expected to add the most jobs to the region’s economy within a decade. After identifying the seven fastest-growing sectors, each of the system’s seven colleges was assigned one.

Next City Colleges brought in industry representatives and asked them what skills they needed from students.

“It was not hard to get conversations with industry going. They were very happy. In many cases, they came to us once they heard what we were doing,” said Hyman.

“They were willing to get into course and curriculum design.”

Now, in each of these seven areas, the colleges offer certificate programs ranging from three months to four years. And the graduation rate, while still low, has improved to 14 percent.

These changes didn’t come without resistance.

“There needs to be a huge cultural shift,” said Hyman. “The first year was just debating that our focus should be training people for the workforce.”

“We have talked to people at Fortune 100 companies about hiring our people but they say, ‘Our HR department has a policy that we can’t hire people without a four-year degree,’” said Chertavian. “But once we have sent people over, they tell their HR department, ‘You have to change the policy.’”

Chertavian said that, although he appreciates that central to what students receive from a four-year college are so-called soft skills, such as the ability to communicate well and solve problems, he thinks those can be taught in a lot less time.

“That is a pretty expensive process for learning non-academic cognitive skills,” said Chertavian. “Those attitudinal and behavioral skills can be taught a lot more quickly.”

While Ted Mitchell, undersecretary for higher education at the U.S. Department of Education, endorsed the idea of abbreviated skills-driven programs, he conceded that there were legitimate concerns about what would be lost if too many students were consigned into these programs—especially if they are disproportionately low-income, while higher-income students continue to go to four-year universities.

“I predict there will be many fewer residential four-year colleges,” said Mitchell. “And I worry a lot about what that will mean for the promise of mobility in our society.”

Mitchell, however, said it was important to recognize that the four-year system is failing scores of Americans, with only one in 10 of students from the lowest income level ever graduating.

Eric Spiegel, president and CEO of Siemens USA, said he thinks the call for schools to focus on job skills will change not only community colleges, but all higher education institutions.

“Community colleges are changing their model to be more demand oriented. So are universities,” said Spiegel. “But the university system is just moving a little slower.”