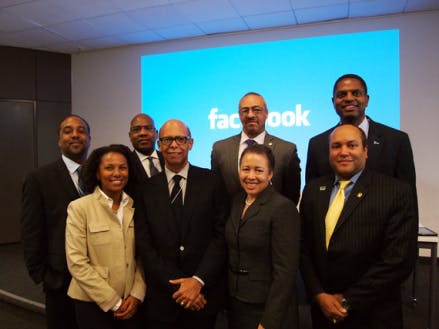 The finding, documented in an analysis conducted by the USA Today newspaper, reveals that on average seven leading Silicon Valley firms had just 2 percent Black and 3 percent Latino employees in technology jobs. In contrast, 4.5 percent of new graduates with bachelor’s degrees in computer science or computer engineering from 179 research universities were Black, and 6.5 percent were Hispanic, according to Computing Research Association (CRA) data.

As for the total base of U.S. computer science programs, the National Center for Education Statistics reports that Blacks and Latinos comprise a total of 18 percent of 2012 computer science graduates, the USA Today analysis says. USA Today’s research includes employment statistics from Apple, eBay, Facebook, Google, LinkedIn, Twitter and Yahoo and computing education data from the CRA’s annual Taulbee Survey.

While technology firms have typically placed blame on a talent pipeline that executives say produces too few Black and Latino applicants for highly-sought Silicon Valley jobs, educators are pointing to the new analysis as evidence that firms are failing to cast a wide enough net to reel in existing talent.

“What you have is that these companies recruit from the same places all the time. And those places coincidentally don’t have high numbers of minorities,” says Dr. Juan Gilbert, the Andrew Banks Family Preeminence Endowed Chair in the University of Florida’s Computer and Information Science and Engineering department.

“If you keep doing that and say ‘we can’t find qualified people,’” then that becomes reality for the companies that are recruiting talent, adds Gilbert, who is a nationally-recognized scholar in the recruitment and mentorship of African-American computer science Ph.D.s.

Dr. Stuart Zweben, a professor of computer science and engineering at The Ohio State University and co-author of the Taulbee Survey, says that, while the minority computing field graduate numbers are low, there remains a gap that institutions and companies can explore and determine what exactly is happening to those graduates.

“Most of the [Black and Latino] students with bachelor’s degrees are going right out into the workforce and not going on to graduate education, at least at the doctoral-granting schools,” Zweben said.

Dr. William McHenry, executive director of the Mississippi e-Center at Jackson State University, believes that Silicon Valley firms need help from government programs, such as the Louis Stokes Alliances for Minority Participation and organizations such as the National Action Council for Minorities in Engineering Inc. (NACME), to tap into the talent pool of underrepresented minorities.

McHenry explained that such programs and organizations have established over decades an infrastructure of faculty members and academic administrators who have become adept at nurturing and developing minority talent in science, technology, engineering and math (STEM) fields. Those same programs and organizations have developed longstanding relationships with companies, such as Fortune 500 firms, but less so with Silicon Valley companies.

“The National Science Foundation through the Louis Stokes Alliances for Minority Participation makes it very easy for companies to find Hispanic Americans, African-Americans, or American Indians. They produce large numbers of individuals in the STEM fields and many of the large companies are employing these individuals,” he said. “I think those organizations have been a doing a great job because without them I suspect we would not have even the percentages that’s noted in the analysis.”

Dr. Karl Reid, executive director of the National Society of Black Engineers, says it’s critical that Silicon Valley companies include minority-serving institutions among the pool of schools at which they recruit underrepresented minorities for jobs.

“A disproportionate [high] number of African-Americans, for example, who graduate with STEM degrees attend HBCUs. If there is not a foot in the door for HBCUs at these institutions in decision-making roles it’s very difficult for the recruiters to really have the contacts, have the deep relationships, [and] have the access to HBCUs,” he said.

Dr. Irving McPhail, the NACME president and chief executive officer, describes the recent disclosures by Google and other companies of their low numbers of Black and Latino technology employees as a significant opportunity for the organization that just last week celebrated its 40th anniversary. NACME, which has raised millions in scholarship funds for minority engineering students, is working closely with the Palo Alto, Calif.-based Hewlett-Packard Corporation to expand the scholarships and internship programs targeted at computer science and computer engineering students. Currently, 10 percent of NACME scholarships go to computer science, computer engineering, and information science students.

As a longtime company board member of NACME, Hewlett-Packard has led efforts to help the organization establish a strong presence within the Silicon Valley community. McPhail says there will be an intentional effort to link scholarship funding with internships designed to help NACME students gain eventual full-time employment with Silicon Valley companies.

“We have a great opportunity to steer our scholarship efforts toward a model that emphasizes employment opportunities in Silicon Valley. This will be a new focus for NACME, but we don’t intend to dilute our work with students in the traditional engineering disciplines,” he said.