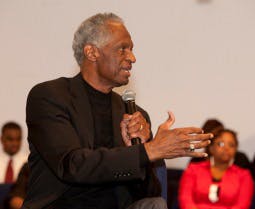 Long before he became a pioneer in the push for parental school choice, Howard Fuller suffered the blows of police batons during protests over the mistreatment of Black students during desegregation in Cleveland, hung out with freedom fighters in Mozambique, and sat at the helm of a radical university that followed the Black revolutionist philosophy of Malcolm X.

In Pan-Africanist circles during the 1960s, he was known as Owusu, or “one who clears the way for others”—a name that would in many ways foretell his activism and advocacy on behalf of poor Black families in the realm of public education.

As leader of the North Carolina-based Malcolm X Liberation University, he irreverently referred to himself as the “H.N.I.C.,” a colloquial acronym from the Black experience that stands for “Head N—– In Charge,” but later became known as the school’s “Mwalimu,” a Swahili word for “teacher.” He and his comrades didn’t shy away from keeping guns in the trunk for their protection while driving the back roads of North Carolina given the racially charged atmosphere at the time.

” I had no philosophical opposition to guns or to using them, if necessary,” Fuller wrote. “So, my traveling companions and I all bought rifles and carried them with us wherever we went.” Such are just a few of the more interesting facts contained in Fuller’s recently-released memoir, titled No Struggle, No Progress: A Warrior’s Life from Black Power to Education Reform.

The book recounts Fuller’s education and evolution—from growing up in the Hillside Housing Projects in Milwaukee to becoming superintendent of Milwaukee Public Schools. From being a star athlete who navigated the social awkwardness associated with taking a “Trailblazer” scholarship to integrate a virtually all-White college in Wisconsin in the late 1950s, to once calling for a majority-Black school district in Milwaukee in the 1980s.

It delves into the political intricacies that gave birth to the Milwaukee Parental Choice Program in 1989—a catalytic event that Fuller helped orchestrate and that he characterizes as a “monumental victory” for the nation’s parental choice movement.

Fuller, 73, continues the fight to expand school choice today in a position he has always seen as a “dream job”—as founding director of the Institute for the Transformation of Learning at Marquette University. It was through the institute that Fuller and his school choice comrades created the Black Alliance for Educational Options, or BAEO, an organization for which he served as its first elected president and that supports parental choice and vouchers.

Much of the latter part of the book is devoted to BAEO’s mission and future. It’s almost as if Fuller is publicly bequeathing the vision of the organization to those who believe in the mantra of school choice. He vows to stay involved in educational battles for as long as he lives.

“Until my time runs out, I will spend my days launching rescue missions, trying to save as many kids as I can, as often as I can, no matter how hard the struggle,” Fuller states in his memoir, which takes its name from a famous quote by abolitionist leader Frederick Douglass.

In many ways, the memoir serves as a manual of tactics on how to effectuate political change within the power structure. Having worked outside the system as an activist who not only advocated but agitated for change, as well as having been a political appointee and head of a school system, Fuller recommends that change agents have both an “outside strategy” as well as an “inside strategy” that involves those who are plugged in or well-positioned within the system.

Working inside the system, Fuller always knew that he would risk being seen as a “sellout” or an “Uncle Tom.” But a look at his record suggests he could never be anything of the sort. Here’s a man who risked life and limb to experience the liberation movement in Mozambique from the front lines—something he writes about with great detail in his memoir.

He also espouses the virtues of breaking the rules and not being afraid to offend people if the cause is just. For instance, when he was invited to give a speech to his fellow top sellers of life insurance, Fuller, who by then had quit the sales job, decided to flip the script.

“Instead, I planned to give a speech on why American companies should stop doing business in South Africa to help bring an end to apartheid,” Fuller wrote. “As I spoke, some members of the audience sat there dumbfounded. Others looked appalled. When I was done, they seemed unsure whether they should even clap. There was a bit of polite applause, but it didn’t matter. I’d spoke the truth.”

Much of Fuller’s memoir deals with his forays and experiences in the realm of higher education.

For instance, when he served as a dean of the General Education Division at Milwaukee Area Technical College, or MATC, Fuller noticed that most Black students took classes in the “C” building, where Continuing Education and most remedial education courses were located, while White students were mostly in the “T” building taking technical classes.

“My goal became to get more students out of the ‘C’ building into the ‘T’ building,” Fuller states.

Once, while working for Dr. Arnold Mitchem, the highly-esteemed TRIO advocate, as director of a TRIO program at Marquette University in the 1970s, Fuller admits he went behind Mitchem’s back to re-enroll a student who had had a baby and dropped out of the program. Fuller said Mitchem considered students who cut themselves off from the program as “dead.” But Fuller, sympathetic to the student’s plight, snuck her back into the program.

Today, she holds a seat in the United States Congress. Her name is Congresswoman Gwendolyn Moore of Wisconsin.

“That’s why I know these kinda programs work,” Fuller said of TRIO programs. “That notion is not some kind of theory or abstraction for me. I’ve seen it.”

Fuller laments how often Black children suffer because their parents are “ill-equipped to nurture and guide,” and he chastises more affluent Blacks who turn their backs on the Black masses due to some sort of “race fatigue.”

“How do you do that anyway, just declare yourself tired of being seen as Black, and tired of caring about your people?” Fuller asks in the book. “It haunts me when I walk into schools, talk to children, and hear stories that remind me what so many poor, Black kids are up against just to survive.”

But there’s one stunning personal admission that Fuller makes in the book about having walked away from his responsibility for a son from an extramarital affair, although he was heavily dedicated to his other three children from early on.

It’s probably one of the biggest contradictions of a life that was otherwise characterized by self-sacrifice, and it’s difficult to disregard his disappearing act—which Fuller himself concedes was a “selfish, irresponsible choice”—when it’s juxtaposed with scenes of his speechifying about “love” for his people and his commitment to fight Black poverty.

Fuller, who himself was fatherless as a child, makes no excuses for being AWOL, and readers will be encouraged to learn that his son, who ultimately reconciled with Fuller—has led an education career that is strikingly similar to that of the father he never knew until he was 25.

Personal failings aside, there’s plenty of lessons of value for anyone who envisions themselves as a change agent on America’s educational landscape. The book is a must-read for education reformers, whether they plan to fight from the outside or within. The book easily belongs on syllabi for contemporary courses in Black studies, particularly those that deal with education and political science.