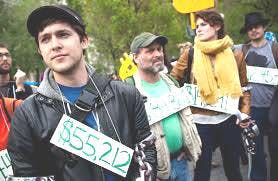 Student debt continues to rise, according to a new report by the Institute for College Access and Success (TICAS) Project on Student Debt, released on Thursday. Average debt climbed to $28,400 in 2013, up from $27,850 the year before.

The report looked at public and private bachelor’s degree granting nonprofit colleges. Debt varies greatly from state to state, with the highest levels of debt in the Midwest and Northeast, and the lowest in the West and South. New Hampshire’s average student debt for graduating seniors was $32,795. At the opposite end of the spectrum, in New Mexico, average student debt was $18,656.

On average, 69 percent of students graduated with some form of debt, although there was great variability on the institutional and state level. For example, in New Hampshire, 76 percent of students from the class of 2013 graduated with some form of debt, making it the state with the highest proportion of indebted graduates. Nevada was the lowest, with colleges reporting that 43 percent of graduates had debt.

TICAS’ picture of student debt is by default incomplete. Colleges are not required to report student debt levels, so researchers had to rely on voluntarily reported information, meaning that TICAS looked at data from only 57 percent of colleges. The data also do not include information about transfer students, or any private loans colleges are unaware of.

“Only with comprehensive, reliable data for every college will we see the full picture of student debt. This is too important an issue for students, schools and policy makers to rely on voluntary, self-reported data. Federal collection of both federal and private loan debt at graduation is both necessary and long overdue,” Matthew Reed, TICAS program director, said in a statement.

Also missing is data from for-profit colleges. Only 1 percent of four-year for-profits chose to report their students’ debt levels. Data from 2012 show that 88 percent of for-profit students took out loans.

A handful of HBCUs were listed in the report. Howard University and Hampton University were notable for making the list of 20 colleges reporting the lowest levels of student debt, between $2,250 and $11,200. Texas Southern University, on the other hand, ranked among the public colleges and universities whose students had the highest levels of debt.