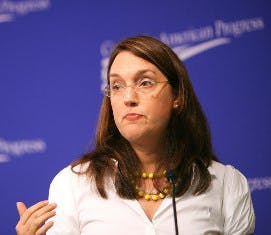 WASHINGTON ― When it comes to advocating for greater reliance on public benefits for low-income individuals, the idea is already a tough political sell among anti-entitlement elected officials and segments of the electorate that view the benefits as handouts.

But what if those public benefits were being extended to community college students as a way to boost their chances of earning a credential?

That was the issue probed Thursday in a policy forum at the Center for Law and Social Policy, or CLASP. The forum highlighted findings from a project called Benefits Access for College Completion, or BACC. BACC is a multiyear demonstration at seven community colleges in six states meant to show how benefits such as SNAP, TANF, child care and transportation could help low-income students stay afloat and stay in school as they work toward a credential.

The impetus behind BACC is that existing financial aid programs are not enough to help students pay for college ― even at community colleges, where the average unmet need for low-income students is $6,000, according to Amy Ellen Duke-Benfield, project director and a senior policy analyst in postsecondary education at CLASP.

“One big barrier … is 40 percent of these students do not complete a degree in six years,” Duke-Benfield said. “That’s a lot of people we’re bleeding out along the way.

“If we’re serious about getting more students to the finish line, that means we have to put some real skin in the game and really think about what it’s going to take to be competitive globally and to have low-income people get competitive wages,” Duke-Benfield said.

Enter the BACC initiative. Launched in 2012, its underlying assumption was that if students got additional financial supports through public benefits programs, their lives would become more stable and thereby make it easier for them to make progress toward earning a postsecondary credential.

But problems arose when ― due to privacy rights ― the project ran into roadblocks when it came to linking student data to public benefits data.

So when it came time to do an evaluation of BACC, comparison data between public benefits recipients and non-recipients could only be obtained at one of the participating community colleges: Gateway Community & Technical College in Kentucky.

And what the data showed was not all that impressive.

For instance, the outcomes data showed that fewer public benefits recipients earned a credential than did non-recipients ― 18.4 versus 21.3 percent, respectively.

However, the data showed that public benefits recipients at Gateway earned more credits than did non-recipients, 37.4 versus 34.8 credits. Recipients also persisted in enrollment at a higher rate ― for 2.81 terms as opposed to 2.4 terms among non-recipients.

Asked about the lower rate of credential earning among benefits recipients, Derek Price, lead author of the evaluation and senior consultant at the OMG Center for Collaborative Learning, which did the evaluation, said the finding was not “statistically significant.”

“I would not make a big deal out of these data, which are from a single institution within a short two-year window,” Price, director of DVP-Praxis, told Diverse via email in a follow-up interview. “And these data are not definitive about the impact of benefits ― or lack thereof ― on college completion.”

“In my view, the story should not be about these data, but about how colleges incorporated benefits access services into their ongoing college operations,” Price said. “Sorry to be cliché, but we need more research and evidence to answer the question you are raising.”

Michael Baston, vice president for student affairs at LaGuardia Community College, 1 of 5 schools included in the in-depth evaluation of BACC, said at his institution, preliminary data show that students who were assisted with applying for and who received public benefits moved from part-time to full-time status and re-enrolled at higher rates than their non-recipient peers.

Baston said a critical component for getting students linked to public benefits is making it an institutional-wide effort. He also said it’s important to engage students to do marketing and campaigns to reach eligible students with positive messages about public benefits as being just another form of financial aid in order to reduce the stigma associated with public benefits.

“That was an important thing to be able to say to students,” Baston said. “When you change the conversation around public benefits, it allows students to see themselves in a larger way,” and public benefits as simply “one of the various things they’re already taking advantage of.”