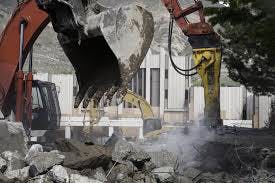 SOUTH BEND, Ind. ― A towering blue-and-white crane looms over the eastern edge of the University of Notre Dame campus, where a 220,000-square-foot research building is under construction. At an adjoining site and elsewhere around campus, backhoes and bulldozers are installing tunnels for sanitary sewers, electric lines and other infrastructure as part of the largest construction project in school history.

The Notre Dame campus is becoming a vast construction zone, leading a building boom that’s taking hold on campuses across the country as the economy improves.

“There’s definitely been an increase in construction activity on college campuses since the recession,” said Dan Kenney, head of campus planning and site design for Sasaki Associates, a Massachusetts-based planning and design firm.

The new spending reflects pent-up demand as schools from Yale University to the University of Texas try to elevate their missions and find ways to attract and retain students.

Private schools, which aren’t bound by state education dollars, are leading the way.

Many of the construction projects focus on student centers and housing, because schools believe students who live on campus are more likely to graduate, Kenney said. The University of Kentucky has added more than 5,700 residence hall beds, including five new residence halls with a total of 2,381 beds since 2013.

Other projects involve renovating aging structures and erecting new ones to bring in more students.

Yale, in New Haven, Connecticut, announced in June it had raised $500 million to build two new residential colleges in its largest expansion since the Ivy League school began admitting women in 1969, allowing it to increase undergraduate enrollment to 6,200, up from about 5,400.

The University of Texas broke ground in August on a $295 million medical school. The school also wants to spend $100 million to renovate a chemistry building and $105 million in improvements in its business school.

In addition to its $35 million research building, Notre Dame’s $700 million construction boom includes a $30 million building to house the departments of economics, political science and sociology and another $30 million building that will house international institutes—including creating a school of global affairs, the first new school or college at the university since 1921.

The work also includes $400 million for projects around its famed football stadium that will add a student center, a building to house the anthropology and psychology departments, a digital media center and music and sacred music departments.

The Rev. John Jenkins, Notre Dame’s president, said the university needs more room as it tries to increase its research capability. It announced earlier this year it was creating about 80 new faculty positions in key research areas.

“It’s just a sense of what our needs are now to achieve our aspirations. We just have a lot of activities in research and we don’t have room to grow, we don’t have the space to grow. So we really need to add more space,” he said.

He said there is no plan to add to the 8,500 undergraduates on campus.

“We value this sort of size that allows us to foster community,” Jenkins said. “We just believe in a residential campus. We believe students learn not only in classes, but in dorms when they interact with one another. They have to take responsibilities for their common life. So that’s a very important part of Notre Dame life, we want to make sure we have the facilities to make that possible.”