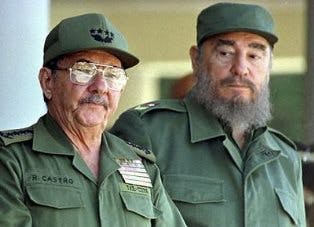 Students say much of what Americans hear about Cuba is related to its leadership—Fidel Castro, right, and his brother, Raul—and communism.

CRAWFORDSVILLE, Ind. ― Although Cuba is not far from the United States, the historical, political and bureaucratic chasm that separates the two nations is almost impassable, according to Ethan Hollander, a Wabash College associate professor of political science.

That is why divorcing political bias from truth about Cuba proves difficult on any given day.

“Everything we hear about Cuba in the United States comes through a really strong filter,” said Nathan Bode, a 21-year-old junior at Wabash College, a small, private men’s liberal arts college in Crawfordsville. “We hear about (Fidel) Castro, communism and Cuba’s role in the Cold War, and that’s all you really get.”

To cross that chasm and find unbiased truth, Hollander took Bode and 13 other students to Cuba last November for his political science class, “Cuban politics and culture.”

The trip not only revealed how the American trade embargo has impoverished average Cuban citizens but how Cuba has become a time capsule—unable to move forward in time. It also gave the students and professors a solid appreciation for President Barack Obama’s current attempts to re-establish commercial and diplomatic ties.

“We are letting an island nation rot without our assistance,” Bode told the Journal & Courier. “It’s kind of nice to see that sense of diplomacy is finally coming out of (the past).”

Hollander agreed. “I think the people who suffered most from the embargo were the Cuban people,” he said. “I don’t think the government suffered because it’s a dictatorship.”

After spending a semester studying the political issues between the United States and Cuba, the students visited Havana for four days. They also spent a couple of days in Miami.

The students heard from supporters and opponents of the U.S. embargo against Cuba.

They listened to lectures at the University of Havana, visited the Museum of the (Cuban) Revolution and met with diplomats at the U.S. Interests Section, which stands in lieu of an American embassy.

The first American embassy opened in Havana in 1923 but closed in 1961 when the U.S. formally cut diplomatic ties to Cuba.

Obama recently announced that Secretary of State John Kerry will be tasked with re-establishing an official embassy in Havana.

The Wabash students also learned about Cuban culture by listening to salsa, eating the food, and watching their tour guide properly smoke a cigar.

“We go there and see people selling cigars on every street corner in the black market,” Hollander said. “The real part of the trip was bringing to life the concepts we were learning back here in Indiana.”

Hollander said the students also were able to see the effects of a stagnant economy.

“In many cases, (the buildings) are crumbling or in terrible shape, but they are still there,” he said. “It’s almost like a time capsule in a way when you go to Havana and you see a city that is almost the same way it was in 1959.”

Ben Finley, 22, a senior in Spanish, said he hopes that Cuba can maintain its culture even in light of progress.

“I feel like it was, basically, the end of an era,” he said.