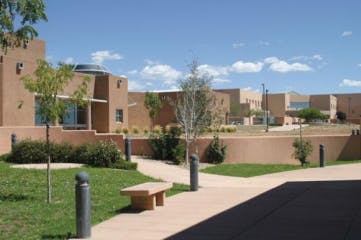 Santa Fe College (SFC) in Gainesville, Florida, is the winner of the 2015 Aspen Prize for Community College Excellence.

Community colleges leaders and higher education officials met at the National Press Club in Washington, D.C., for the award ceremony on Wednesday.

LATI has been a finalist-with-distinction for the past three years running. “For us to make it each time says a lot about the breadth and the depth of the good things that are going on at Lake Area Tech. We’re very proud of that,” LATI president Michael Cartney said.

In years past, LATI has brought together a committee of faculty, staff and students to determine how to allocate the prize money. Some of the money went towards innovation grants, which faculty and students can apply for, and some has gone to Aspen scholarships.

“That’s a scholarship where students nominate other students that have helped them, because we look at Aspen as being a way for the colleges to help each other,” Cartney said.

The Aspen Institute created a new prize this year, the Rising Star award, which went to Kennedy-King College (KKC), one of the six City Colleges of Chicago (CCC).

KKC won the award for new success in the areas of college completion and creating a pathway towards completion in different disciplines. To help students along their way, KKC brought on more advisers.

“It feels awesome. It feels awesome as the leader of the institution, a former alum of the institution, and I know it feels great for the people who did the work to make this happen,” said Cheryl L. Hyman, CCC chancellor. “But it has to feel even better for the community, in which this school is based. And I hope it gives all them hope, and shows the rest of the world, that it’s more than just the crime that they see on TV that exists within this community.”

Among the top four finalists, KKC has by far the greatest proportion of underrepresented minority students, at 94 percent of the total student body.

Hyman did not divulge how KKC will utilize the $100,000 prize. “I’m saving that for a big announcement when I figure it out,” she said.

During the award ceremony, second lady Dr. Jill Biden spoke about the importance of community colleges and their power to transform the lives of individuals, no matter what their life circumstances happen to be.

“One day soon, community colleges will be free,” Biden said. “I’m proud to be part of an administration that is committed to investing in our students and restoring the promise of the American education.”

The state of Tennessee was the first to offer free community colleges. Other areas, such as the city of Chicago, where KKC is located, offer similar programs. Tennessee governor Bill Haslam addressed the crowd at the Aspen Prize ceremony to tout the success of the program, which he championed.

“There’s a huge conversation around the country today about access, and that’s incredibly important. But I love the fact that you’re talking about success,” Haslam said. “That’s the part of the conversation that I’d love to see the nation pick up on.”