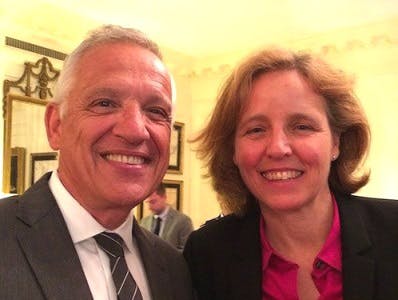 Along with the focus on inclusive entrepreneurship, Demo Day provided a platform for leading technology companies, such as Pinterest, and investors to showcase their commitment to diversity. In addition, engineering deans representing 102 U.S. colleges and universities made public a national pledge to increase diversity among engineering students by building a more representative student pipeline.

Obama said the “deans at America’s engineering schools are committing to recruit and retain more diverse student bodies, building the pipeline for the next generation of innovators and entrepreneurs because this is something we are seeing again and again and again.”

“We are not producing all the technical talent, all the engineers that we need. And part of the reason is because too many girls and too many young people of color are getting intimidated and winnowed out of the process, not being mentored, not being encouraged, and we deprive ourselves of the talent that we need in order for us to continue to be a dynamic, innovative economy — because that’s the part of the population that’s growing,” the president told Demo Day attendees.

With his words, Obama echoed the engineering diversity pledge letter that was announced early August and has since gained more than 40 additional signatories in the past three weeks. The letter specifies that engineering schools develop diversity plans, establish at least one K-12 or community college pipeline activity to recruit a more diverse pool of students, and promote partnerships with non-Ph.D.-granting engineering colleges that enroll significant numbers of underrepresented minorities. Lastly, the letter stipulates that engineering schools and colleges “commit to the development and implementation of proactive strategies to increase the representation of women and underrepresented minorities in our faculty.”

Dr. Yannis C. Yortsos, dean of the University of Southern California Viterbi School of Engineering, said the diversity pledge represents a leadership push on the part of engineering educators to reinvigorate their efforts at diversifying the engineering profession. As chair of the Engineering Deans Council diversity committee within the American Society for Engineering Education (ASEE), Yortsos and others took on the task this past spring of organizing engineering deans to take new action on diversity.

“We believe there’s a need to change the conversation about engineering and about STEM in general. These are very important disciplines and areas, and the economic vitality of the country and national security to some degree depends a lot on whether we have a prepared workforce,” Yortsos said.

Yortsos noted the White House Demo Day opportunity resulted when he informed a White House science and technology official during a National Science Foundation meeting in June about the engineering deans’ interest in strengthening their institutional diversity efforts.

“The White House Office of Science and Technology Policy said it was open to making our diversity pledge a part of Demo Day. We timed our letter to coincide with the event and made it happen,” recalled Yortsos, who participated in the Demo Day event.

Yortsos said the Viterbi engineering school has undertaken a number of K-12, admissions outreach and faculty recruitment initiatives in recent years that have helped diversify the undergraduate engineering population with increased numbers of women and Latino students.

“I am particularly proud of the fact that fall 2015’s entering freshman class consists of approximately 38 percent women, when the national average is still below 20 percent,” he said.

“In a sense, the diversity pledge is a mechanism for us to make visible what we have been doing and what we plan to do. It’s not that the diversity will cause us to do things, but from our point of view it’s a way to show the world our commitment and to make it visible,” said Dr. Ed Schlesinger, dean of the Whiting School of Engineering at Johns Hopkins University.

Schlesinger noted that the Whiting School is active in Baltimore city schools, where it has focused on STEM achievement. In one partnership, the engineering school works with the Barclay School, a K-8 Baltimore City School near the university’s Homewood campus, in which the school invests in improved STEM curricula, teacher training and facilities.

“We intend to be involved with the schools with whom we have partnerships for the long haul. There is no quick fix when you’re focused on building a pipeline of talented students,” Schlesinger said.

Dr. Debra Larson, dean of the Cal Poly, San Luis Obispo College of Engineering, said that, while fostering diversity has generally been a high priority for women and minority faculty members and administrators in engineering, it remains critical that senior college and university leaders also place a premium on diversity.

As the first woman to lead the engineering college at her institution, Larson said she’s made progress with increasing student and faculty diversity but notes the current administration under President Jeffrey D. Armstrong has helped empower deans and other administrators to be proactive in their diversity efforts.

“We’ve been fortunate here at Cal Poly that our president has been around for a while. He’s in his fifth year now and has been doing a good job in speaking explicitly about the importance of diversity in our entire community,” she said.

“And that’s been a major change for this institution. That wasn’t the past and so through that explicit language and willingness to say that out loud that’s empowered people throughout the institution,” Larson added.