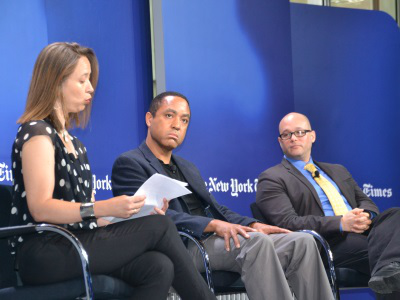 NEW YORK — Recruiting and retaining underprivileged students at elite institutions was a key theme of the fifth annual New York Times Schools for Tomorrow conference that concluded yesterday. The proceedings kicked off Thursday evening with the unveiling of the 2015 College Access Index, which aims to measure economic diversity at top colleges. The index was created by The Upshot, a New York Times blog.

At a session titled “Low Income/High Potential,” the presidents of Arizona State University, Vassar College, Grinnell College and the University of Chicago joined Upshot editor David Leonhardt to discuss how to ensure that underprivileged yet talented students can enroll and succeed at their respective institutions.

“We’re sort of high-touch places; our student/faculty ratio is 9 to 1. We have 1,600 students; almost all of them live on campus. We have great financial aid.” Nevertheless, at Grinnell, “Students of color are slightly less likely to graduate but we’re starting a whole series of interventions to address that.” However, highly selective, small institutions like Grinnell “are more likely to catch any student who stumbles.”

Kington adds that larger public institutions “need to get it right” when it comes to graduating their underrepresented and underprivileged students as the elites are only servicing a small fraction of such students. He notes that, among the interventions which show promise at larger, less-selective institutions, they include analytics which use data to “catch when a student may not be going in the right direction.”

In a session titled “Race and Class in Admissions and on Campus,” noted author and Columbia University professor John McWhorter broached the issue of why some high school graduates should not seek out a bachelor’s degree, but would fare better with a two-year degree, having learned a trade which could command an annual salary approaching six figures.

“Society requires a college degree for too many things, and I think we have gotten away from a respect for work,” McWhorter said. He added that “the default idea that to be a legitimate American person is to, after high school, spend four years attending classes diagonally related to anything that you’re ever going to do is inaccurate.

“I think we need to get back to the specter of vocational education and community colleges … because I think” that a four-year degree “really isn’t worth it for a great many people.”

Dr. Angel Pérez, vice president for enrollment and student success at Trinity College, stated his belief that “everyone who aspires to college should have the opportunity to do so, and we should figure out a way in this country to finance that.” However, he generally agreed with McWhorter, stating that he’s seen examples, even in his own family, of individuals who went to a four-year institution for the wrong reasons.

Pérez noted that some of these individuals may have felt, “‘I’m doing this because that’s what I’m supposed to do,’ but they were not passionate about it, didn’t really care for it, and sometimes ended up on a college campus and that experience for them was” destructive, as they left feeling down on themselves and their potential.

Also, Pérez expressed concern about efforts to remove the consideration of race in affirmative action and emphasize class diversity.

“For me, it’s not an issue of one or the other; I think we need to take both into account,” Perez says, noting that, in his years working in admissions, he has considered both race and class. If “we remove the race factor from the equation, we’re not necessarily going to see the outcome that … we have looked for in the past, diverse communities in higher education that represent the world.”

For more on the Schools for Tomorrow Conference, visit www.www.nytschoolsfortomorrow.com.