The Folly of Safe Space on Campus

In his 2013 book, Ebony & Ivy: Race, Slavery, and the Troubled History of America’s Universities, Craig Steven Wilder notes the incestuous relationship between slavery ― and racism ― and the academy. Regardless of whether they lied in the North or South, whether they were Ivy Leagues or public flagship institutions, a great number of American institutions of higher learning were not only complicit in and built upon the enslavement of Blacks in this country, but they were instrumental in propagating the very ideals that made racism such a pervasive thought in this nation.

Pointing out that “the academy never stood apart from American slavery,” but instead made up “the third pillar of a civilization built on bondage” (with religion and government being the other pillars), Wilder made the case that the two institutions cannot rightly be separated.

The book’s synopsis eloquently describes the relationship between them: 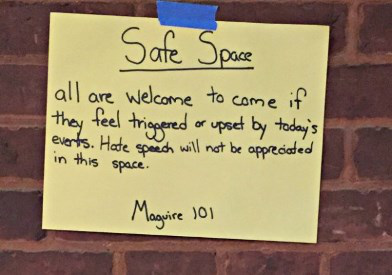 “The slave economy and higher education grew up together, each nurturing the other. Slavery funded colleges, built campuses, and paid the wages of professors. Enslaved Americans waited on faculty and students; academic leaders aggressively courted the support of slave owners and slave traders. Significantly, as Wilder shows, our leading universities, dependent on human bondage, became breeding grounds for the racist ideas that sustained them.”

As the proliferation of protests around the country in recent weeks have made painfully clear, this entangled history is still visible on campuses today. Whether via statues of Confederate generals or buildings named for known racists and slave owners or the relegation of Black students and faculty to cultural center ghettos rather than including their experiences in the overall fabric of the campus or the persistent underfunding of historically Black colleges and universities by states across the nation, few students of color can be convinced that these institutions have ever been untangled.

Slavery was legally abolished, but the mindsets that justified slavery have not been. Auctions are no longer held during university meetings, but students of color have not been made to feel welcome members of the academic family. Stories about the need for diversity throughout the ranks of an institution still seem to come as a surprise to some (or, at a minimum, people feign surprise in their responses: we had no idea that we should be seeking diverse faculty and administrators!). Meanwhile, still too few opportunities are created for scholars and leaders of color to ascend into these positions (we tried, but there are no good candidates of color out there!).

Instead, the half-witted response to the need for increased diversity on campus is creating cultural studies departments or cultural spaces or ethnic history classes, often led and taught by those who are not of the communities they’re trying to serve. This is doing a disservice to the students and faculty of color seeking a familiar space on campus; one can make a career of researching a group without ever really fully understanding all of the cultural nuances that define said group.

As protests ring out around the country with the ever-growing realization by today’s students that there is no “safe space,” no “homing ground” for them on many of these campuses across the country, it may be important to reconsider the weight we put on these spaces.

If college is supposed to prepare one for life in the “real world,” should we continue to expect these things to change on campus? Campus life is a microcosm of the broader society. American society is still inherently racist. Our systems of authority are racist. This nation, like its institutions, was founded on and continues to profit from slavery. Capitalism, which is as synonymous with Americanism as Old Glory or the Star Spangled Banner, is reliant upon one group besting and taking advantage of another for its own advancement. In this nation, it meant the White majority trampling over every other race, which was the foundation of slavery and racism.

There will likely never be truly safe spaces on campuses, because the country is not safe. Maybe we shouldn’t expect there to be ― at least not without expecting the same of the entire nation.