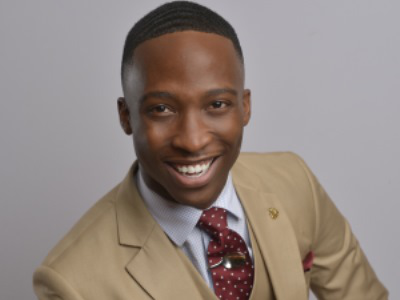 “We help students, veterans and regular citizens with the federal hiring process,” Johnson says. “My job is to learn how to adapt to each [person] and make sure that I’m able to tackle those problems for them.”

“As soon as I get an assignment, I have to do it so it’s never a case of trying to do last–minute work — so I can always stay ahead,” he says.

Part of Johnson’s ability to balance being a student and professional comes from his attachment to TSU. “I was thinking the other day when I was walking on campus that I literally became a man here at this school,” he says.

After being recruited by the track team, Johnson left his home in Flint, Michigan, with two things in mind: “Beating everybody [on TSU’s track team] because I knew I was fast and having very high grades,” he says.

However, his TSU family expected more.

“A lot of people pushed me to run for student leadership positions,” Johnson says, but at the time, you couldn’t pay him to shed his tracksuit. “I wore my track sweat suit everyday — it was usually just going to the cafeteria and practice, then straight back to my dorm to do homework.”

But as Johnson became more grounded in his studies and athletics, he accepted the encouragement from his professors and peers and branched out. After swapping his athletic gear for suits and ties, Johnson won the student-elected position Mr. TSU in 2013.

In accepting the position, he inherited an event called the State of the Male Address. “It focuses on the male perception in America, men’s style and the issues that are plaguing men in America,” Johnson says.

The daylong event filled with guest speakers, informational sessions and special giveaways made a bigger impact than he’d expected.

“Of course you plan for the event to be successful, but the basketball team came out, the football team, the coaches,” Johnson recalls. “It was simply amazing — people came and told me afterward that everything they learned was so inspiring and it encouraged them a lot.”

After the event, he began to visit high schools and universities to promote future initiatives and collaborative-based activities for other organizations and students to participate in. He was particularly impacted by one school.

“When I walked in the room with the kids and young adults, they were worshipping me like I was Obama or somebody,” Johnson says. “It made me feel like I have a duty to do something that was so much bigger than myself.”

The event, along with guidance from mentors and inspiration from mentoring youth, led him to start the nonprofit National Brotherhood Chain of America in March 2014.

“I literally did not know half of the things that I knew in regard to professional development and men’s style — how to dress in different settings — before winning Mr. TSU, going to conferences and coming to college in general,” Johnson says, explaining why he started the organization.

The nonprofit’s mentorship program incorporates professional men who are well into their careers, collegiates on the path to professionalism and junior men pursuing secondary educations. The elder groups provide guidance to the younger men.

The brotherhood involves about 200 professional men, he says. The group is expanding from Nashville to Murfreesboro, Tennessee; Memphis; Atlanta; Washington, D.C.; Chicago; Detroit; Lansing, Michigan; and Flint, Michigan. In April 2016, the organization will host its first national male conference at TSU.

“I’m not going for a conference feel; I want them to be extremely comfortable like they’re just hanging out with friends while talking about very serious issues that are going on in America today,” Johnson says.

This fall, he intends to go to law school. Combining his interests in criminal justice, athletics and the performing arts, he plans to become a sports and entertainment lawyer.

As Johnson says, “My favorite scripture is, ‘For we know all things work together for the good of those who love the Lord’ and I really feel like everything is working together for me.”