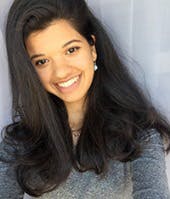 When Maya Juman sat down to create a list of reasons she should be granted a “Top Ten List Scholarship” from unigo.com—a website that features college reviews to help students make a more informed choice about which college to attend—she decided to get creative.

So instead of making a simple top ten list, she made a list of reasons that rhymed.

But the story gets better. Not only did her reasons rhyme, they touched on a wide range of some of the most pressing issues in higher education today—from the pitfalls of taking out large student loans and failing to graduate within four years to the benefits of doing undergraduate research, studying abroad, and seeking an advanced degree.

I have big plans in store

You’ll help me pay for:

When I graduate at twenty-two

I’ll have more to see through

Have even more monetary dues

Juman’s rhymes paid off in a big way when Unigo selected her last week as the latest winner of its Top Ten List Scholarship, which is worth $1,500.

Juman told Diverse that, while writing the rhymes “took a little thinking,” all the issues she touched on in her piece came naturally.

“These were things that my family and I had been discussing frequently during the college application process and for months leading up to it,” said Juman, a senior at an IB school in the Queens borough of New York City.

“The prospect of graduating in debt has loomed large for me as I have seen it happen to acquaintances and friends, and thus I was pretty conscious of this when composing a college list, applying for financial aid, and making my final decision.”

Juman is not a first-generation college student—both her parents are in writing and editing and have bachelor’s degrees—but her story is still quite instructive for students in search of money for college.

“I think it’s extremely important for students and families to be much more aware of student loans and their ramifications when entering the application process,” Juman said. “Many seniors aren’t fully cognizant of how much college really costs until they receive their financial aid offers in April.”

Juman, who is of mixed heritage (her father is a white New Yorker and her mother is from India), was born in New York but spent eight years in Hyderabad, India.

She moved back to New York for seventh grade. She credits her parents, teachers and college adviser at her high school for helping her in her college quest.

Now, she is headed to Yale University next fall.

“My family is thankfully able to afford Yale due to a generous financial aid award,” Juman said.

She plans to major in ecology and evolutionary biology but says she may change her mind.

“I would like to pursue a career in research and academia, which is why a master’s and/or PhD would be important,” Juman said.

She said she is interested in zoology in general but specifically marine conservation biology.

“I think my exposure to the field of evolutionary biology through the research I have done with graduate students and postdoctoral fellows has been crucial, because it has given me real insight into what my future career may entail,” Juman said. “I’ve learned that an undergraduate degree matters much less than where one attends graduate school, a fact that only reinforced my determination not to go into debt for college. It simply wouldn’t be worth it for me.”

Which is what motivated her to rhyme her way into some scholarship money.

Would be graduating in debt

I’m counting on you

To help me through

So I won’t have to worry and fret

Juman says students who need money for college should get started on applying for scholarships early in the year. Scholarships, she said, can make a “huge difference.”

For students or college access professionals who are interested in entering Unigo’s next “Top Ten List Scholarship,” the deadline is in December. Unigo also offers a different scholarship every month. The topics range from a $3,000 “All About Education” scholarship to a $1,500 “Flavor of the Month” scholarship where the only thing a student has to do is write a very short essay that answers this question: “If you were an ice cream flavor, which would you be and why?”