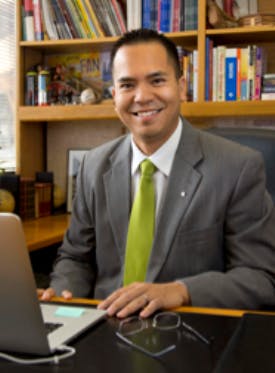 Dr. Kyle Reyes recalls how important it was to — if not achieve authenticity — avoid culinary bloopers that might offend Utah Valley University (UVU)’s Latino guests.

So Reyes, who’s fluent in Spanish, accompanied UVU’s head chef to a Mexican restaurant that’s popular among local Latinos. Before cooking for the parents of high school students whom university officials were trying to recruit, the chef wanted to learn how to prepare dishes that were not part of his repertoire and what ingredients were missing from the stock in his kitchen.

Paying close attention to details — whether it’s for family refreshments or teaching teens how to shorten paths toward their career goals — has helped UVU more than quadruple its Latino enrollment in a decade.

“We don’t just print brochures in Spanish,” says Reyes, who was director of UVU’s Latino Initiative from 2007 to 2009.

UVU also tripled its annual number of Latino graduates from 2004 to 2014, thanks to support and outreach by many university staff and faculty. This spring, 365 Latinos graduated, the majority of them with bachelor’s degrees, a figure similar to that of 2014, the first time the head count topped 300.

The traditionally White institution enrolls about 31,000 students, of whom 10 percent are Latino. Across all racial groups, 35 percent are first-generation college-goers and, as recently as 2014, about 70 percent of students worked more than 20 hours weekly.

Since 2007, the university has stepped up recruitment of Latinos by sponsoring parent open house events on campus and parent night events in the community. University officials have also woven tailor-made curriculum into its Summer Bridge programs to appeal to Latino youth.

In addition, they host an annual dinner celebration that recognizes undergraduate scholarship winners and high-achieving middle schoolers of Latino descent — parents in attendance, too — which helps instill pride in educational accomplishments.

No matter what endeavor or activity, however, UVU officials have long relied on the same principles to guide their Latino outreach and cultivation of relationships:

Lewis’ staff consists only of herself, two part-time staffers and the occasional work-study undergraduate to cover local communities in Orem, Utah, where the university is located, and in four surrounding counties including theirs.

During the academic year, they conduct two or three parent night events every month at high schools and churches, sometimes returning to a venue to present information on a different topic. For instance, one session might focus on “What is College?” and a subsequent one at the same locale might tout the benefits of concurrent enrollment, whereby high schoolers can simultaneously earn college credit which trims consumer costs.

When UVU launched the Latino Initiative in 2007, the parent night programs were called “Música, Comida, Novela,” because the events offered admissions and financial aid information over free dinners of traditional ethnic food. Parents also watched videos of soap opera episodes — or telenovelas — of fictional characters preparing for and attending college.

Catered meals from popular restaurants drew robust attendance to the events, Reyes recalls, but whenever circumstances — including a threadbare program budget — forced parent nights to migrate to the UVU campus, the university dining hall staff would assume cooking duties for the “comida.” That’s when the anxious but conscientious head chef asked a local restaurateur if he, with Reyes in tow as translator, could visit his kitchen for a crash course in do’s and don’ts.

The idea for “Música, Comida, Novela,” emerged from talks between Reyes and local Latinos when he was a GEAR UP counselor at UVU.

“We asked what kind of event would encourage them to learn about college and financial aid application processes,” recalls Reyes, who’s now UVU’s chief diversity officer.

But times change. As more Latino youth enrolled at UVU year after year, families of middle and high schoolers eventually said that dinner and entertainment were no longer necessary enticements.

Nowadays, when middle and high school groups tour the UVU campus through the Latino Initiative, they participate in a session about how to write a personal statement. Lewis also convenes a session explaining planning strategies toward higher education. For instance, if a young visitor says he or she wants to become a teacher, Lewis asks what steps are required to accomplish the goal. That leads to discussion about high school courses and studying for the ACT exam.

Meanwhile, UVU officials have tailored their annual Summer Bridge program offerings to target Latino youth. Curriculum such as “Latino Scientists of Tomorrow” and “Latino Teachers of Tomorrow” has introduced incoming freshmen and high school seniors to different careers, particularly important because so many youth lack these role models — even though K-12 enrollment in the area surrounding UVU is about 30 percent Latino.

Latino undergraduates continue receiving support from Lewis and her staff. For instance, Lewis meets one-on-one with each recipient of scholarships awarded through the Latino Initiative to discuss university-wide tutoring services and academic and career planning resources. She steers them toward Latino affinity groups nested within specific academic departments so that students can make connections outside the Latino Initiative.

It all adds up to a holistic strategy that has convinced parents of Latino undergraduates that UVU is where they want their other children and those of their neighbors and friends to attend.

“We want as many people on and off campus involved as possible,” Lewis says. “It’s about establishing relationships of trust.”