JCSU Establishes Center for Culture and Race in China

Johnson C. Smith University, an HBCU located in Charlotte, North Carolina, has brought African-American history and culture to China with the opening of the Center for American Culture and Race at Guangdong Baiyun University. 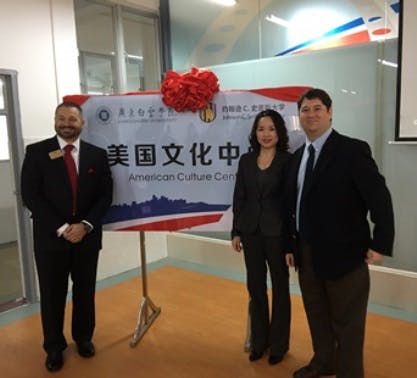 people to American culture. Some centers have a specific focus, such as sport or technology. As a historically Black university, Johnson C. Smith University (JCSU) has developed the only ACC to focus on race.

While lectures at the CACR are given in English, as much of audience is made up of English majors and international faculty, establishing the center did provide an interesting challenge right from the start. For one thing, the Chinese do not use the term race the way it is commonly used in the United States. They use words more akin to ethnicity or culture.

“In the African-American experience, race is used to distinguish between Black, brown, White, etc.,” says Dr. Brian Jones, dean of the College of Arts and Letters at JCSU. “We needed to convey that in Chinese, and we had to discuss with our Chinese counterparts … about what that word meant and how to translate it.”

Assisting in the process was Anna Wood, a grants officer in the Office of Government Sponsored Programs and Research at JCSU, who is a native Chinese speaker. She assisted not only with language translation, but was also a program participant.

Guangdong Baiyun University is a private college with approximately 15,000 students, 10 percent of whom are English majors, in Guangzhou, China. JCSU wanted the CACR to be unique in how it addressed race head-on. Jones says that, as an HBCU, JCSU is an excellent position to lead an international dialogue about the experience of race in the United States.

The programming since the center’s opening this past March has been lectures on campus and the biweekly audio podcast series, Archways, which is available for download via direct subscription and through iTunes. Video podcasts are in future plans.

“We’ve already addressed topics like HBCUs, American slavery, social work, and immigration and migration,” says Jones. “We’ve recorded a podcast with the mayor of Charlotte, the Honorable Jennifer Roberts, talking about Charlotte as an international city and our diverse population. We have a wealth of podcasts planned on detailed topics, like the civil rights movement, Black Lives Matter, sneaker culture, race and media, and more.

“Plus, we are hosting Chinese students and faculty from Guangdong Baiyun University on campus and exposing them to American culture firsthand.”

The first visitor to Charlotte from China toured the Levine Museum of the New South and the Latta Plantation, both of which speak to the history of slavery and Jim Crow.

African-American art adorns the walls of the CACR, including a piece by JCSU associate professor of art Hasaan Kirkland, and there is also literature available. The center is equipped with iMacs, iPads and iPod Touches to provide Chinese students access to aspects of American culture.

One JCSU faculty member goes to CACR per semester, as well as one student during the academic year and two in the summer.

“The reception has been terrific,” says Jones, who gave a lecture this past spring on American higher education with a specific focus on HBCUs. “So far, we’ve sponsored multiple talks on higher education — its history, pedagogy and the cultural differences between U.S. and Chinese education — and on American literature. We are sending a member of our social work faculty this summer to engage that topic, which is one that the Chinese are quite interested in.”

Jones says it has been a fascinating experience for him and other JCSU faculty. On an early trip to China, he had lunch with the then-interim president of Guangdong Baiyun University, Liu Jianfeng, who was not a traditional academic, but rather was the Party Secretary for the Communist Party at the university.

“It was a unique experience for me, sitting with a party official over tea at the Garden Hotel in downtown Guangzhou discussing the ideas of [renowned American educator] Dr. Ernest Boyer,” says Jones.