WASHINGTON — Colleges and universities should rethink the way they distribute institutional aid in order to matriculate more students who lack the means to pay, several scholars said Thursday at a discussion on enrollment management.

“I do believe that institutions of higher education ought to be engines of opportunity, not perpetuating or accentuating inequality,” said Donald Hossler, senior scholar at the Center for Enrollment Research, Policy, and Practice at the University of Southern California.

But Hossler cautioned against being too critical of colleges and universities for using their institutional aid to attract more high ability students who can pay their tuition — a trend identified in a New America report titled “Undermining Pell: Volume III: The News Keeps Getting Worse for Low-Income Students.” 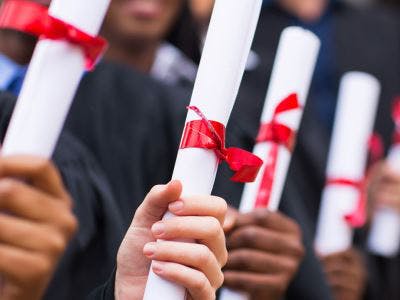 While the report stated that many colleges and universities — including increasingly cash-strapped public colleges hurt by state budget cuts — have shifted toward using their institutional aid dollars to “entice” top students who are wealthy enough to pay full freight, Hossler cautioned against condemning the practice outright.

“Some of this kind of ‘merit aid game’ can be helpful,” Hossler said, noting that the tuition generated from paying students can be used to help students without the ability to pay — something Hossler referred to as the “Robin Hood effect.”

Hossler made his remarks during a panel discussion at New America — a research and policy organization that regularly tackles issues in higher education.

While the organization seeks policy solutions, Hossler said the issue of enrollment management is a complex one that does not lend itself easily to being solved through new laws.

“I hope nothing in my remarks suggests that some type of legislation at the state or federal level will fix this,” Hossler said. “In fact, that would be a big mistake,” he said, suggesting that legislation on the issue might not have the desired effect.

Hossler broached a number of possible questions to explore.

“We might look at how large is the unmet need gap for low and moderate income students, and what it would take to close the gap,” Hossler said.

He also said it may be worthwhile to ask if colleges and universities have an obligation to provide equity for out-of-state students, who generally pay more at public colleges than state residents.

“For private institutions, we don’t separate in-state from out-of-state,” Hossler said. “So why should we separate this out for public institutions? I think that’s an interesting question that people can legitimately disagree on.”

Tuesday’s event afforded a couple of other scholars the opportunity to present their research on enrollment management and to raise new questions for future discussion.

Lesley Turner, assistant professor of economics at the University of Maryland at College Park, spoke of the tension between using Pell grant funds to help students from diverse backgrounds versus seeing Pell grants as a way to “relax revenue constraints.”

Ozan Jaquette, assistant professor of higher education at the  University of Arizona, presented a finding that growing the share of non-resident students leads to a decline in Pell grant recipients and Black and Latino students.

“This is a big deal because this dramatically effects the campus climate,” Jaquette said. “You feel isolated. That really effects your experience. I think that’s an important finding.”

Jacquette took aim at initiatives such as White House-led “pledges” to college access, saying there’s a need to research what institutions of higher education are doing, not what they are saying.

“For me, what I despise most is symbolic commitments to access,” Jacquette said. “This is the sort of stuff that drives me crazy. I try to do research that makes that difficult.”

Along those lines, Jacquette called for more research on college marketing and recruitment to see whether colleges are visiting affluent communities more in their search for prospective students and ignoring students from neighborhoods that are poor.