Experts: Education Not Likely to be Priority at Democratic National Convention

As more than 50,000 Democrats converge on the City of Brotherly Love this week to formally nominate Hillary Clinton as their presidential nominee, experts say education isn’t likely to take center stage at the Democratic National Convention. 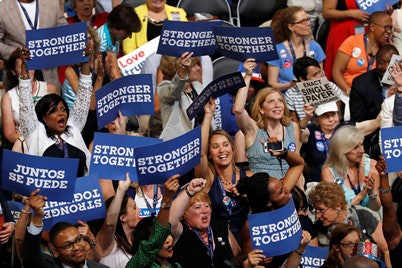 “I would say that education is not functioning as a central issue among Democrats or Republicans,” says Dr. Barbara Stengel, Professor of the Practice and Director of the Secondary Education Department of Teaching and Learning at the Peabody College of Education and Human Development at Vanderbilt University.

Still, Stengel—an expert on educational policy issues—says the decision by Democrats to invite Raumesh Akbari, a Tennessee legislator, who has put forth legislation calling for state-wide education reform, is “probably a signal among the Clinton crowd that they’re going to put on the brakes a little, on state takeovers and charter schools.”

Stengel says the selection of U.S. Sen. Tim Kaine as Clinton’s running mate is also telling, given that his wife, Anne Holton, is the Virginia Secretary of Education and an avid supporter of public schools.

“I don’t think education will be central to the convention, but these are two subtle signs that the Clinton administration won’t have the same enthusiasm as the Obama administration when it comes to testing and charter schools,” says Stengel. “It’s not anti-charter, but they are recalibrating the balance.”

Meanwhile, the decision to have Clinton’s Democratic rival U.S. Sen. Bernie Sanders keynote the first night of the Convention may be an attempt to position Clinton more to the political left, even as she and Kaine are largely considered to be centrist Democrats.

During his primary run, Sanders called for free public college tuition. Initially, Clinton scoffed at the idea but has since changed her position, adding that she now supports eliminating tuition at in-state public colleges or universities for families earning up to $125,000 a year.

“The conversation is not being had on the Republican side and won’t be,” says Davis. Among the Republicans, “there’s really a push back on loan-free, tuition-free education. If you look at the Democratic platform, you’re going to hear progressive echoes, and Bernie Sanders is responsible for that.”

Ironically, experts say that the only mention of education during a prime-time speech at the Republican National Convention was when Donald Trump’s son—Donald Trump Jr., who graduated from private, elite schools—called for massive education reform.

“Our schools used to be an elevator to the middle class, now they’re stalled on the ground,” he told Convention delegates who gathered in Cleveland last week. “They’re like Soviet-era department stores that are run for the benefit of the clerks and not the customers — for the teachers and the administrators and not the students. You know why other countries do better on K through 12? They let parents choose where to send their own children to school.”

In pointing out a contrast between the two vice presidential candidates, Clinton argues that the education record of Trump’s running mate, Indiana Gov. Mike Pence, is lackluster when juxtaposed to Kaine’s.

“While Mike Pence slashed education funding in Indiana and gave more tax cuts to the wealthiest, Tim Kaine cut his own salary and invested in education from pre-K through college and beyond,” says Clinton in a recent speech, adding that, when he was governor of Virginia, Kaine expanded the state’s preschool programs that served at-risk children in families with incomes near or below the poverty line. She said that Kaine has called for measures to reduce the cost of attending college.

Last month, Dr. David Wilson, president of Morgan State University in Baltimore, gave testimony to the DNC Platform Committee calling for special support for Historically Black Colleges and Universities (HBCUs) and Minority Serving Institutions (MSIs). This week, the Democrats announced that support for HBCUs and MSIs has become a plank in the party platform and that a Clinton administration would vow to “create a robust and historic dedicated fund to keep costs down, provide quality education, and ensure dedicated support to improve student outcomes and completion rates.”

Davis said that, if either party wants to attract young voters, they have to address educational issues in the months leading up to November’s general election.

“And we can’t have these conversations about K-12 and higher education separate,” he says. “It’s a part of the same, and the candidates have to do a better job making the connection.”