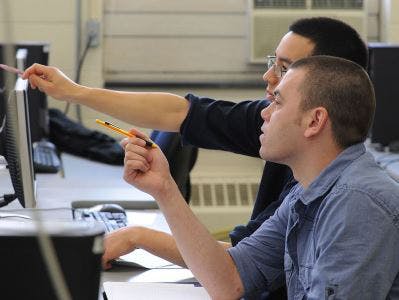 Moving to the rural environs of the Connecticut River Valley from the Washington, D.C. and Baltimore metro area presented Harvey-Smith with a decidedly different kind of lifestyle. Yet it was one that she decided to embrace together with her husband, who retired from his job on Capitol Hill. They took up residence in Claremont, New Hampshire.

“We didn’t want to be far away from town; we wanted to be in the middle,” Harvey-Smith says. Their home, in the middle of town, sends a message — Harvey-Smith is a part of the community now. “No matter where you go education for the most part is the same,” she says. “I felt that I could make a difference here.”

River Valley Community College is one of seven colleges within the Community College System of New Hampshire (CCSNH). It serves the rural southwestern part of the state, with campuses in Keene, Claremont and a new campus, scheduled to open this fall, in Lebanon, New Hampshire, just south of Dartmouth College.

To the outsider, New Hampshire might be best known as a tourist destination, with its abundant lakes and mountains, but it is also home to many industries, particularly in health care and advanced manufacturing. Some of the largest regional employers are hospitals, particularly in rural areas, while the southern part of the state is the site of growing technology and industrial operations.

The state’s community college system is playing a key role in bridging the workforce gaps in those emerging industries.

“New Hampshire ranks high as far as the percentage of the population with a college degree … but a key reason for that is the baby boomer generation who moved to New Hampshire in the late ’80s and early ’90s,” says Dr. Ross Gittell, chancellor of Community College System of New Hampshire. “They are the ones with relatively higher educational achievement and they’re hitting retirement age.”

Unemployment for youth between 16 and 24 in New Hampshire is lower than the national average, at 7 percent, compared to the national average of 10.5 percent. Yet many young people look elsewhere when it comes time to go to college, say Gittell and others. University and community college leaders acknowledge that part of their incentive is the high cost of public higher education in the state.

New Hampshire’s university system and community college system rank among the most expensive in the country, due to relatively low levels of funding from the state itself. The state provides $2,591 per student. In-state tuition and fees at New Hampshire’s public four-year college and universities is $14,538.

Low levels of funding pose challenges for the system, Gittell says. “We have to ensure the academic quality of our institutions, but we also have to ensure access,” he notes.

The system has a balancing act to keep between funding programs at a sufficient level but also not making tuition prohibitively expensive. Tuition in the community college system has been frozen for the past five years in New Hampshire.

Affordability is a challenge for both the university and community college system, and so, recognizing a common problem, the systems have created a workaround. In 2014, New Hampshire piloted a systemwide dual admissions program.

Dual admissions pathway programs already exist between community colleges and universities across the country. Statewide programs, however, are less common. In addition to New Hampshire, the state of Minnesota recently announced a pilot program of its own for its state universities.

Pathway programs are becoming increasingly attractive as states, and institutions, look to serve workforce needs and attract more students. “I think there is starting to be some good pockets of innovation around the country,” says Dr. Todd J. Leach, chancellor of the University System of New Hampshire, which comprises the state’s four public institutions of higher education: the University of New Hampshire, Plymouth State University, Keene State College and Granite State College.

“There has been, for some systems, the luxury where they didn’t have to work together because they both were reaching capacity with the markets they served,” Leach adds. “With demographics declining and workforce needs, I think partnerships are absolutely going to be necessary for meeting those needs.”

Transfer pathways and articulation agreements between community college systems and university systems differ on a state-by-state basis, and sometimes on a college-by-college basis. The result is an uneven process at some institutions and the chance that not all credits earned at a community college will be accepted at the four-year institution.

According to a Community College Research Center (CCRC) report, nationally, 42 percent of students who transfer to a four-year university from a community college complete their degree. New Hampshire is on par with the national average, according to the CCRC report.

Given the challenges of the transfer process, New Hampshire community college and university leaders say that they have thought carefully about how to make the pathway as seamless and accessible as possible for students from start to finish. As they enroll in the community college system, students can sign up to participate in the dual admissions program. In order to be eligible to move to the university system, they must maintain a 2.5 GPA and complete an associate degree in good standing.

“It’s not necessarily a high bar for most students,” Leach says. “We want to make the requirements for that contingency as simple as possible so that students can have confidence at the front end [and] when they attend the community college system that they’re going to ultimately see their pathway through to the university system.”

“We like to think of it as the best of both: the affordability and the geographic access, the small classes, the intimate settings, the strong student support of community college, with that clear pathway to the four-year bachelor’s degree,” Gittell tells Diverse.

In its first year, 25 students signed up for the pilot program at Great Bay Community College, according to Shannon Reid, CCSNH director of communications.

“It is an exciting program; we know that both systems of higher education are very committed to it and we believe that it will continue to grow,” says Dr. Widolfo Arvelo, president of Great Bay.

Since the program opened to the rest of the system’s six colleges, 175 students have enrolled, according to Reid. However, overall interest in the dual admissions pathway program is much greater than anticipated, with around 1,000 students indicating interest in participating.

In the most recent academic year, reports Leach, approximately 700 students transferred from the community college system to the university system. While the program is still in the beginning stages, it appears to be poised to transform access and opportunity to higher education for hundreds, if not thousands, of New Hampshire residents.