President Obama may have spent much of his time in office as the nation’s chief advocate for getting more students and educators STEM-smart for this century. He’s talked about it, held White House STEM events on it and persuaded Congress to allocate nearly $3 billion in each of the last two federal fiscal years for STEM and STEM education.

With dozens of razzle-dazzle distractions getting young people’s attention compared to their more focused generations before, today’s educators in science, technology, engineering and mathematics, aka STEM studies, are finding there is no stampede to their classrooms, despite the president’s appeals and widespread talk of the importance of STEM studies to the future of the nation.

The challenge is spurring new thinking about how to lure today’s early college and college-bound students to give STEM more than a passing gaze. STEM is getting a top-to-bottom overhaul with diversity in mind and aimed at students who have lots of choices of what to do with their adult lives. 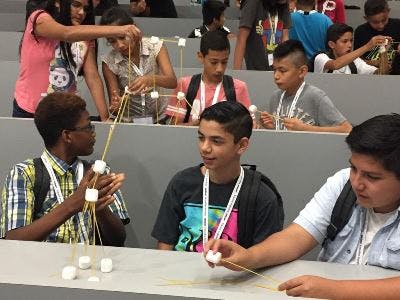 “In our society, people have been brainwashed that science is difficult and boring,” says Dr. Sandra White, a professor and director of the Center for Science, Math and Technology Education at North Carolina Central University (NCCU).

“There is a paucity of teachers who have been put in classrooms to teach science who are not certified to teach science,” says White, echoing college-level science education peers who note the lack of interest starts years before college.

Gone are the years of pure lectures, she says. “You have to have creativeness, interactive content,” White notes.

NCCU, which began direct outreach to middle school students about STEM studies in 2008, is among a growing number of institutions taking new approaches to make STEM studies attractive to potential students. How well these eff orts are working at NCCU and other institutions is years away from measuring, White and others say, but it’s a focused start, with diversity as a key component.

From NCCU’s Students Making Another Science Success Story (SMASSS), to the STEM Knowledge Center at Alabama A&M University in Huntsville to the new STEM summer camp for minority middle school boys at California State University, San Bernardino, the STEM push is picking up steam and is aimed at the most underrepresented segments of society.

California State University, San Bernardino (CSUSB) is a 17,000-student, largely commuter college in Southern California that is more than 75 percent first-generation college students. It is among a dozen institutions across the country chosen this summer by Verizon, the giant telecommunication company, to receive a $400,000 grant.

The grants are aimed specifically toward programs that appeal to middle-school minority males, considered one of the most at-risk groups of being lost to careers in STEM.

The Verizon STEM grants help CSUSB on a variety of fronts, says Ricki McManuis, director of development for the institution’s College of Education. As a teacher’s college, the grant will enhance the university’s ability to get the attention of more male minorities about college and going into teaching. It will also help youth it reaches gain a greater understanding of STEM fields of study and opportunity.

The CSUSB program, the Verizon Innovation Learning Camp, involves four four-day STEM camps that give participants entry-level training in computer app design, 3-D printing and entrepreneurship. Bus transportation is provided to students who have no transportation to the university campus. Lunch and a snack are included as well.

In addition, the program has a component that provides for teachers in the summer camp to meet with the students throughout the school year and work with their public school teachers to help ensure they are up to speed on what the students are learning. “The teachers will be reinforced,” says McManuis.

Gerald Vines, director of the STEM Knowledge Center at Alabama A&M, says his program aimed at aspiring engineers is a three-week program for rising high school seniors. Initially funded by NASA in honor of the late astronaut Michael P. Anderson, the institution’s College of Engineering, Technology and Physical Science has kept the program alive since 2005 with grants and support.

Math is embedded in every part of the learning sessions that range from robotics to mechanical, civil and physical engineering, Vines says.

“Bottom line is the kids don’t realize they were doing math,” he says. The summer program, which tries to reach 200 students each summer, has received positive comments from other departments in the university, says Vines.

Several are now setting up “knowledge centers” for their departments.

The stepped-up efforts can only make a small difference in helping to educate the 100,000 STEM teachers the White House Office of Science and Technology (OST) hopes to produce, as evidenced in its spring update report on sources of federal monies for STEM.

Even that agency says the challenge is “daunting.”

Still, the OST made clear that the institutions and organizations supporting its thinking are on the right track.

“This effort must include women and minorities who are poorly represented in many STEM fields — despite the fact that these demographic groups comprise more than two-thirds of college students,” says the White House report. “Failing to engage underrepresented groups will lead to shortfalls in our nation’s STEM workforce.”

Biologist Carolyn Cousin, a professor at the University of the District of Columbia, offers a bit of wisdom for those seeking to boost young people’s interest in STEM studies. Science is a time-intensive field of precision, she notes.

“If you are going into STEM, you’ve got to start early,” says Cousin, who has received a number of grants and study support for her work over the years. “You’ve got to have a passion [for STEM work].”

As Cousin conveys: “If you are willing to work hard, give up your weekends, stay in the labs, you will do well.”