For the first time since 2007, Black student enrollment in the medical school at the Oregon Health & Science University (OHSU) could top four this academic year.

With the exception of Asians, who made up the largest group of students of color (12.4 percent) at the medical school in fall 2015, other groups lagged way behind or didn’t exist at Oregon’s only public health and research university and the state’s only public academic health center, which includes two teaching hospitals and schools of medicine, nursing and dentistry.

Five Blacks are projected to be among the medical school’s 2016-17 incoming class — two from Oregon, one from California, one from Washington and one from New York. The first day of school is when OHSU administrators will do an official headcount of who’s in the classroom, but for now, they are relishing a bright forecast. 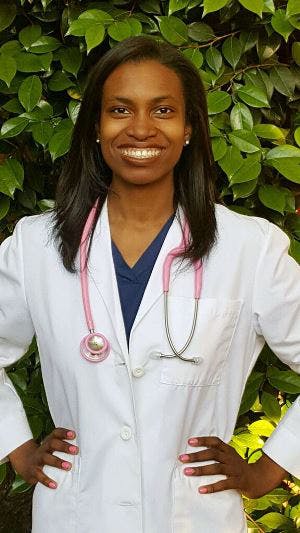 Allyson Knapper will be attending Oregon Health & Science University, one of a few African-Americans, despite the institution’s growing outreach. (Photo courtesy of Allyson Knapper)

“For us, that’s a big gain,” says Leslie Garcia, the school’s interim chief diversity officer and assistant vice provost, of finally reaching five. That’s because, for years, the number of entering Black medical students at OHSU has been tiny or stuck on zero, as in 2013 and 2015. At the Portland-based school, the Black population is slightly over 6 percent and only at 2 percent in the state of Oregon.

But what’s made the difference in the upcoming academic year and allowed the school to “move that dial,” says Garcia, is hammering a “strategic diversity plan” for recruiting largely in-state for students. It also includes brokering partnerships with other academic institutions, civil rights and social service organizations, and K-12 schools with high numbers of Blacks and Hispanics.

Such partnerships, she says, can help expose children of color to medicine as a career option. “It’s a work in progress,” says Garcia of the school’s multipronged plan for diversity and inclusion that has been evolving since 2010.

Based on a May report from the American Association of Medical Colleges (AAMC), institutions are heading in that direction. More than 80 percent of the 137 schools that responded to AAMC’s recent survey stated that they had or planned to have specific admission programs or policies for recruiting a diverse student body interested in caring for underserved populations within the next two years.

OHSU “should be proud” of its gains, says Marc Nivet, AAMC’s chief diversity officer. Recruiting African-American and other students of color in a region that is overwhelmingly White, he adds, “is certainly a challenge, but it’s not insurmountable.”

Nivet is hopeful that recruitment and outreach at OHSU and other medical schools struggling to grow their diversity numbers remain a focus and that even small, steady gains become a long-term trend.

“Diversity is not a point that you reach,” says Nivet. “It’s a continuous journey of improvement.”

Garcia knows what it means to recruit and stay the course — and to finally usher in homegrown talent for her medical school. Garcia waited more than a decade for Allyson Knapper to enter OHSU medical school.

As a student, Knapper has always been a standout — at the top of her class, focused and outgoing. Starting in sixth grade, the Portland native spent three consecutive summers at YO Science (Your Opportunity in Science), an OHSU-sponsored camp and diversity initiative for underrepresented minority and disadvantaged middle school students interested in pursuing careers in the health and science professions.

That’s when Garcia first met Knapper — and the latter first entered the pipeline. By high school, the OHSU campus had become a familiar place for Knapper, who participated in internships and programs that allowed her to “shadow” doctors, spend time in the lab and the operating room, and attend lectures. These activities fueled her interest in medicine and science — and kept her on a steady track to medical school. Garcia calls these opportunities for students of color “entry points into OHSU’s pipeline.”

Today, at 23, Knapper is a May graduate of Rice University and just weeks away from realizing the academic and career journey that took root while she was still in middle school. Looking back and forward, Knapper says she is both ecstatic and grateful. She will be among OHSU’s five first-year, Black medical students — a reality that she takes in stride.

“Being born and raised in Portland, the Whitest city in America, has been a mixed bag,” Knapper admits. “We’re just used to it.”

Studying and living in Houston as an undergraduate, though, “was a cultural shock.” At Rice, for the first time Knapper wasn’t the only person of color in the classroom and she had professors and mentors in the sciences who looked like her.

Medical school could have provided her with many of those same social, cultural and academic experiences and points of pride. Knapper applied to and was accepted to Morehouse Medical College in Atlanta and Nashville’s Meharry Medical College, both historically Black institutions.

But she chose OHSU, the school that has been courting her since childhood.

Morehouse and Meharry, which are among the top producers of Black physicians in the United States, “are great schools, but they just couldn’t offer me the same level of resources and access, or financial support,” says Knapper, the recipient of OHSU’s President’s Fund Scholarship.

Garcia wants more Oregonians like Knapper to also say yes to OHSU. Like elsewhere in the nation, the steep price tag for a medical degree is a major barrier for most students of color and groups underrepresented in medicine. Reducing or eliminating the cost of their medical school education, says Garcia, is one strategy OHSU is using to attract those students.

The prestigious four-year scholarship Knapper was awarded covers tuition, fees, health insurance and more. For Knapper, “It sealed the deal.” But so did OHSU’s efforts over the years to keep her tethered to the medical school and focused on her dream of becoming a physician.

“Miss Garcia would email me and check in often, even when I was away at college,” remembers Knapper. “She got me connected to other medical students and to her colleagues at OHSU. I’m really grateful to her and the office of diversity.”

Delvin Akin, a 31-year-old Army veteran, also found his way into OHSU’s medical school pipeline. One of his professors at Portland State University, where he graduated from, connected Delvin to an OHSU researcher and fellow Black veteran who had an opening for a lab assistant. Akin jumped at the chance.

“Once I was in the door, they put me under their wings,” says Akin, a former active-duty combat medic, of his early OHSU experience. In 2015, Akin was accepted into OHSU’s Summer Equity Research Program.

This fall, Akin will join Knapper in the first-year medical school class.  But at the same time, Akin will stand alone — he will be the first Black man to matriculate in the School of Medicine since 2014.

These numbers mirror national trends for Black males in medical school. In August 2015, AAMC released data indicating that the number of Black men applying to and attending U.S. medical schools was at its lowest point since 1978.

Curious about the numbers, Akin looked at who else in Oregon was applying to medical school this year. AAMC data revealed that, in Oregon, he was one of only nine African-Americans.

Of the 491 medical school applicants in the state, the majority were White (307) and Asian (77). The data are troubling, says Akin, and point to a medical school pipeline that needs to be replenished.

Even with multitiered diversity plans for recruiting and retaining students of color, hosting social events, having a new vice president for equity and inclusion, and even a diversity story wall, says Garcia, seeing the return on the investment “has taken us years — a lot of time, a lot of commitment and a lot of resources.”

Knapper and Akin say they are proof that so-called pipeline programs, outreach efforts and nurturing environments do work, but more and earlier interventions that get OHSU into African-American and other communities of color are what is needed.

Says Knapper: “You have to get students when they are really young and trying to figure out who they are and what they want to become.”