Washington — When the time came for 18-year-old Emmanuel Charles to pick a college, his first inclination was to go to Morgan State University or Temple University. 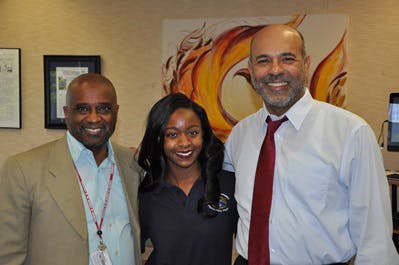 Jalia Johnson is flanked by UDC President Mason and COO Troy A. Lamaile-Stovall. Jalia was the first DC student to accept a DC-UP scholarship.

Both schools accepted him and—as a D.C. resident—he would have been able to basically pay the in-state tuition rate at either school through the DC Tuition Grant Assistance program, known as DC TAG.

But when Charles learned from his high school principal that the University of the District of Columbia—or UDC—was offering a full ride to a select group of top students such as himself, plus a $6,000 housing stipend, Charles scrapped his plans to go out of state and settled on going to college close to home.

“Money was just an issue and when I was informed that I could receive full four years of scholarships for free, I just thought that would be the best option for me,” said Charles, who—as one of five children—says he did not want to further financially burden his parents, who have already sent three of their children to college.

Charles was also concerned about the impact that student loan debt might have on his future financial stability. He has heard the stories of college graduates who can’t find good jobs despite having a college degree and who are burdened by debt.

“I just thought that the free housing and free college tuition just seemed like a better deal than having to pay any money,” Charles said.

Charles is attending UDC this fall through a new initiative called DC-UP that seeks to attract the top students from the District with generous scholarships.

Critics say it’s wrong to lure top students with scholarships to attend struggling colleges when they could go to more competitive schools with higher graduation rates, but proponents say it could be a major financial and academic boon to students.

Among other things, the program, which stands for District of Columbia University Partnership, offers full rides plus a $6,000 housing stipend to every valedictorian and salutatorian who attends a DCPS or public charter school in the District.

Charles earned a 3.76 GPA at Richard Wright Public Charter School in the District.

As of one recent count, Charles was one of a total of 47 students who had accepted the DC-UP scholarship. Most of the students had a GPA between 3.0 and 3.4, a university spokesman said.

The DC-UP program, which also includes an amnesty component that forgives the debts of recent former students who return and complete on time, is the brainchild of Troy A. LeMaile-Stovall, chief operating officer at UDC.

Despite critics who say it’s wrongheaded to woo top students to colleges that struggle with low graduation rates, as does UDC, because it lessens their own chances of graduation, LeMaile-Stovall said he believes the program will have the opposite effect.

“Given that the market profile for students today indicates they are more consumerists and transactional, UDC, through this program, becomes a strong consideration as a choice for all students, especially academically gifted prospects within the District,” LeMaile-Stovall wrote in response to an inquiry from Diverse.

“Many students today, around the U.S. and within the District, are laden with debt,” LeMaile-Stovall said, adding that finance is one of the three top factors that affect progression toward a degree, with the others being academic ability and personal motivation.

By removing or lessening the impact of debt, he said, it will enable students to concentrate on their studies.

“Therefore, this program, alongside a strong student development and success team being trained to be predictive, proactive and capable of identifying potential attrition roots, will work to ensure persistence and progression, which will indeed increase the graduation rate,” LeMaile-Stovall said.

Others, however, suggest otherwise.

For instance, Joshua Goodman, associate professor of public policy at Harvard University, cited research that shows students are “remarkably willing to forgo college quality” in order to get scholarships and that, when high-achieving students in Massachusetts accepted such tuition-waiver scholarships at in-state public colleges with lower graduation rates, it actually lowered the students’ completion rates.

The study is relevant to DC-UP because it looked at a merit aid program that gives high-scoring students tuition waivers at in-state public colleges with lower graduation rates than available alternative colleges.

For perspective on what that means for students such as Charles, consider the fact that the graduation rate at his first two choices, Morgan State and Temple, are 31 and 66 percent, respectively.

At UDC, which includes certificate, two-year, four-year and master’s degree programs, the overall graduation rate is 16 percent, according to The College Scorecard, although UDC officials say their latest cohort graduation rate for its bachelor’s degree for the 2009 incoming class was 34 percent.

Nationally, the average six-year graduation rate for first-time, full-time undergraduate students who began their pursuit of a bachelor’s degree at a four-year degree-granting institution in fall 2008 was 60 percent, federal data show.

“I’d much prefer to see UDC focus its energy and resources on improving its graduation rates generally, rather than focusing resources on a small number of students who’ll likely be worse off,” Goodman said. He added that their presence at UDC Is “unlikely to substantially help the other students on campus.”

“The idea that we can’t invest in both recruiting the best and brightest and programs to increase progression and graduation is inaccurate,” LeMaile-Stovall said. “Our latest cohort graduation rate for our bachelor’s degree for the 2009 incoming class was 34 percent, which is a significant increase, and we have definitive plans to increase that rate over the next few years.”

“Our students are not wealthy and often come from broken ecosystems,” Mason said. “Because of this, no matter how naturally gifted they are, their talent is often deeply suppressed.”

Charles, the student, who plans to study music this fall at UDC, said he isn’t concerned with what the statistics show about graduation rates at UDC.

He says the fact that he graduated from high school from an “inner city” high school in the District—which has one of the lowest public high school graduation rates in the nation, 59 percent compared to 79 percent nationally—is an indicator of his ability to get through college as well.

“That’s just a number that shows how many people get there and find out college isn’t for them,” Charles said. “It doesn’t have to apply to me. If I just do what I gotta do, I’ll be alright.”