Growing up as a Black boy in an impoverished Boston community was no easy feat. “We had to deal with the massive amounts of life lost, incarceration and the crack epidemic. It was predicted that Black males my age wouldn’t live to see the age of 25,” says Dr. Omékongo Dibinga. “So walking out of the door with those expectations placed upon me every day was a challenge.” 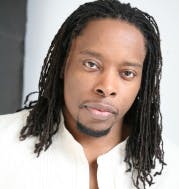 As a Congolese American, Dibinga, 40, learned early on that racial discrimination can come from his own kind. In grade school, he was bullied by his Black peers, among others. In graduate school, he was not accepted by many of his African classmates.

Dibinga’s parents shaped his path to social justice advocacy. As a youth, they exposed

him to the culture, history and traditions of the African diaspora. During his toughest

year of grade school, he used his origins as motivation. “I felt like I didn’t want to be an embarrassment to these many people who fought for me to be where I am,” he says.

His cultural interests were complemented by a love of hip-hop. “It’s the soundtrack of my life,” he says, adding that he picked up writing rhymes and spoken word as early as elementary school.

Dibinga graduated from the Boston Latin School in 1995. “I went from that same school to where I had 27 F’s on my report card to graduating as a member of the National Honor Society just because I was able to embrace my culture and realize that I can use that as strength and empowerment,” he says.

With nine academic degrees between them, Dibinga’s parents were role models for pursuing higher education. “Not going to school wasn’t an option in my house,” he

After spending his freshman year at Morehouse College, Dibinga transferred to Georgetown University for its renowned School of Foreign Service. At Morehouse, he wrote seven papers. At Georgetown, he wrote 42. Needless to say, his first semester in Washington was much more difficult. “But when I saw what I needed to do to get through, I was able to get myself together and get myself on point,” Dibinga says.

He graduated from Georgetown in 1999 with a bachelor’s degree in foreign service and a certificate in African studies. Dibinga furthered his education at Tufts

University. Graduate school was a time of global expansion, he says. “I also learned

that I was in the right pursuit of what I was doing as an artist.”

While his fellow peers dropped personal pursuits for their studies, Dibinga continued

to rap and perform spoken word in and outside the classroom. “I realized that, if I separated myself from the essence of who I was, I was going to struggle. So I had to not lose my artistic expression,” he says. “I tried to blend in and be like everybody else, but I was miserable.”

Dibinga’s final degree, a Ph.D. in international education policy, came after more than a 10-year pursuit. After entering the University of Maryland, College Park, he

“Part of the reason was because I have a philosophy that, if it’s not fun, I don’t do it,” he says. “So if I get called to do a show in South Africa or New York, or to go do a residency in L.A., I would do those things—they became the priority because that’s what I love to do.”

It wasn’t until he heard Jay Z’s Black Album in 2003 that Dibinga narrowed his focus. In particular, the song “Moment of Clarity” resonated with him, he says, as he questioned the possibility of Jay Z “milking the industry because he wanted to build a bigger platform for Black people.”

personally, Dibinga completed his doctoral degree in 2015. His dissertation title was

Throughout his professional career, Dibinga has lectured in venues from TEDx and Harvard University to Russell Simmons’ Hip-Hop Summit. He’s published and produced seven books, seven fusion-music and motivational CDs, and one independent DVD.

In 2011, he started UPstander International, in which he works with organizations, from K-12 schools to four-year universities and federal government agencies, to train leaders and to provide individuals and organizations with the tools to stand against injustices. “I work with staff on what they can do to build culturally competent environments where everybody feels they’re celebrated and not tolerated,”

he says.  Dibinga also works as a professor of cross cultural communication at American University, where he teaches students the hard truths about power, race and culture.

As a professor, he uses his classes as a call for action, as students study everything from homophobia and anti-Semitism and Islamophobia to hip-hop’s global influence.

“We don’t sugarcoat issues; we don’t do politically correct stuff,” he says. “We go in on it because I want them to be able to speak knowledgeably about issues we are dealing with today because most people can’t.”

In all his work, Dibinga hopes that those he interacts with will experience growth.

“That’s my job on this planet … to expand people’s perspectives and to be a bridge builder.”