When it comes to working your way up to a leadership position as a minority professional in the world of student financial aid, one of the best things you can do for your career is to volunteer for a professional association.

That advice comes by way of Brenda M. Brown, director of strategic initiatives within the Office of Student Financial Assistance & Employment at the University of Miami. 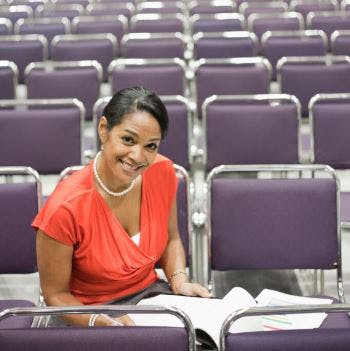 Brown made her remarks during a presentation titled “Volunteerism: Taking Charge of Your Own Personal Development,” at the annual conference of the National Association of Student Financial Aid Administrators, or NASFAA. It was presented during a panel discussion titled “Perspectives: Minorities in Leadership.”

In fact, at one point, she held positions in all three organizations. Her volunteerism has even led her to win the Most Valuable Professional award from NAFSAA.

“To me that was like the best honor I could have,” Brown recalled of the award.

For Brown, volunteering is not necessarily about trying to impress higher-ups through altruism, although there are benefits when your supervisor sees you taking the initiative. Instead, Brown relates, volunteering is also about becoming well-versed in the issues that confront students and financial aid administrators.

“One of the biggest things I’ve gotten out of my involvement is the opportunity to get into the legislative updates and advocacy efforts that can impact not only you as a leader but students across the country,” Brown said. “The other thing that’s cool is, being in this association, you can learn more about what’s coming and you’re in the know before other people. That’s a plus for your institution.”

Another benefit of being in an association is leadership development and the chance to travel to conferences, which enable financial aid administrators to build and expand both professional and personal networks.

“This is one of the ultimate outcomes: the long-term relationships that you can build,” Brown said. “People end up being there not only as a mentor for you but they can be longtime friends.”

Don’t worry about the cost of attending a conference, Brown said. Chances are, she says, funds for travel and lodging from the association will be available.

“A lot of people are afraid that their schools can’t afford it,” Brown said. “In most cases, when you volunteer, the association is going to pay your cost. Your school will not. So don’t worry about funding.”

In terms of getting time off to attend conferences, it’s a simple matter of making the case for how it will lead to exposure for the institution where you work, Brown said.

“The really cool thing and a big selling factor is it could be a positive promotion for your school,” Brown said.

There are an abundance of opportunities to represent a particular segment of the student population.

“There’s always a diversity initiative,” Brown said. “You can be a voice.”

But once you ascend to leadership positions, be prepared for criticism, said Tami A. Sato, senior director for enrollment management and financial aid at Marshall B. Ketchum University.

“If you choose to do a leadership position, you’re going to be up for criticism,” said Sato, who has served as federal relations chair, ethnic diversity action chair and president of the Western Association of Student Financial Aid Administrators, or WASFAA, as well as various positions at the California Association of Student Financial Aid Administrators, or CASFAA, and NASFAA. “It comes with the territory.”

“Every time you get an award or do a presentation, write it down,” Sato said. “It’s good for your job but also if you’re asked to run for office.”

Patricia Scott, association vice president for Student Financial Assistance and Education at the University of Maryland, Baltimore, spoke of how her expertise in graduate student debt — particularly with medical and dental students who may have accumulated more than $200,000 in student loan debt — enabled her to be effective as a volunteer for NASFAA’s Public Service Loan Forgiveness Task Force.

“Having a lot of knowledge allowed me to be an active participant on that task force,” Scott said.

Scott said volunteering to chair various groups has helped catapult her into her current leadership position.

“I’m always the person who says, ‘I can be the chairperson for that,’” Scott said.

Serving as the chair for various groups — such as the University System of Maryland’s Intercampus Financial Aid Group — enabled her to be selected as a representative to the Maryland Higher Education Commission’s Financial Assistance Advisory Council, which deals with rules and regulations and the overall direction of the commission on issues of financial aid.

Scott has also served as chair of the multicultural diversity committee for the Eastern Association of Student Financial Aid Administrators, or EASFAA.

“All of those things together allowed me to create a path where I am as an assistant vice president,” Scott said.

Scott said it’s important to develop expertise in financial aid early on in order to make oneself valuable on campus. “We all know that usually on campus, no one really knows what financial aid is, is financial aid important, until a letter goes to the president that says you didn’t do something,” Scott said.

Wayne Harewood, director of financial aid at Kingsborough Community College, said: “The easiest place to begin to volunteer is at the state level.

“I tried for many years to volunteer at NASFAA, and every year, I would apply and every year I would get turned down,” said Harewood, who has served as treasurer. “Finally, after six or seven years of volunteering, I got on the NASFAA diversity committee at that time and this current year, I’ve been on three NASFAA committees.”

Harewood — who has also served in various capacities at NASFAA and EASFAA — advised workers who are interested in volunteering to keep offering to volunteer and submitting proposals to present at conferences, even if they get rejected.

“Don’t be afraid to step out there. Don’t think you’re not smart enough. Don’t think anything negative about yourself,” Harewood said. “Just step out, volunteer, and it’s going to change your life.”